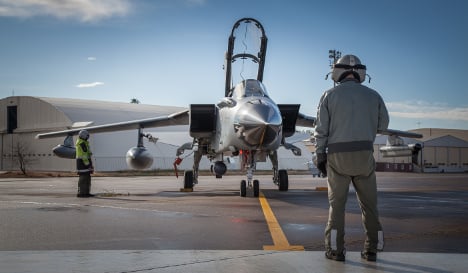 A German Tornado jet at the Incirlik base in Turkey. Photo: Bundeswehr/DPA.

Germany in December agreed to send Tornado surveillance jets and tanker aircraft to the Incirlik base in southern Turkey to aid the multinational coalition fighting the jihadist Islamic State group and currently has about 240 soldiers stationed there.

But Turkey has repeatedly refused to allow visits to Incirlik by German politicians, prompting junior coalition partner the Social Democrats (SPD) to demand Germany's withdrawal from the airbase.

German media reported in June that Turkey had cancelled a visit to Incirlik by parliamentary members and that Turkish officials said only “technical and military personnel” were allowed to visit the base, not politicians.

Germany's military is a parliamentary force, meaning that MPs have decision-making power over deployments.

A German mandate in Incirlik runs out at the end of the year, and the SPD has threatened to block its extension.

“If it is no longer possible to visit our soldiers, then it is out of the question to extend the mandate,” Rainer Arnold, the SPD's defence expert, told Spiegel.

Without citing its sources, the news magazine said the defence ministry is examining whether it could transfer its deployment to Jordan or Cyprus instead.

Tensions have been rising between Germany and Turkey over the German parliament's decision to recognize as genocide the First World War-era massacre of Armenians by Ottoman forces, as well as Ankara's threat to back out of a crucial March deal with the EU on migrants.