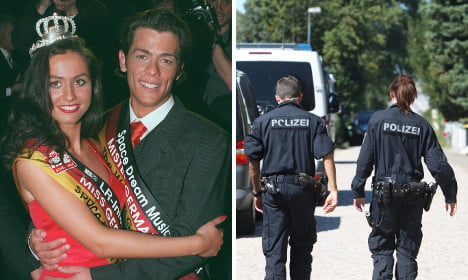 Left: Adrian Ursache in his glam days as the 1998 Mr. Germany. Right: Police trying to evict him from his own 'country'. Photos: DPA.

Ursache apparently had started a group of so-called “Reichsbürger”, or citizens of the Reich, who do not recognize the current government of the Federal Republic of Germany and therefore do not believe they should pay taxes or fines.

The 41-year-old beauty king had declared his house “Ur Nation” and he was supposed to be evicted by police on Wednesday after he had not paid off a debt he owed for the property. But authorities could not evict him that day due to his large number of supporters.

On Thursday morning when police arrived at 8am, Ursache was joined by 15 comrades in his cause, who started throwing stones and other items at the officers, and threatening them with guns.

A shootout erupted and some 200 officers were brought in to quell the conflict.

Who started the shooting remained unclear on Thursday afternoon, but police said both Ursache and police had fired shots.

Ursache was seriously injured during the gunfire exchange and had to be taken to hospital by helicopter.

Two police officers were also injured, one on the neck, possibly from the shooting, while the other was bitten by one of Ursache’s supporters.