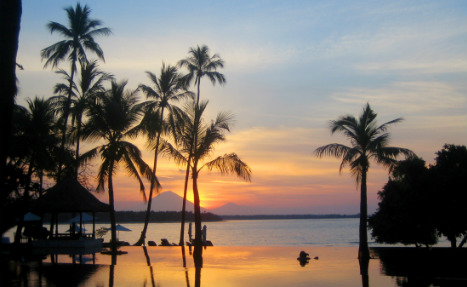 The 35-year-old German, his Indonesian partner – a transgender woman – and two Indonesian men were detained on Monday, accused of making crystal meth together, the anti-drugs agency said.

The group could face up to 15 years in jail if found guilty of producing and using the substance, the agency said, but the suspects look likely to avoid the death penalty as they had so far made only a small quantity.

Just 10 grams of the drug was seized when they were arrested.

Authorities suspect it was mostly for personal consumption, with just a small amount sold to others on Bali.

Indonesia imposes capital punishment for some drug-related crimes, such as trafficking narcotics into the country, and has caused global outrage by sharply increasing its use of the death penalty against drug convicts.

The German, whose identity was not disclosed, “was the one who came up with the idea to start the meth lab four months ago”, said anti-drugs agency official I Ketut Arta.

“The clandestine lab did not start producing until a month ago… it was producing on a small scale.”

Numerous bags full of powder and plastic bottles with rubber tubing hanging from the top were seized when the suspects were arrested, equipment authorities suspect was used to make the crystal meth.

The German had been living on Bali for eight years and claimed to be a businessman working in property, the agency said.

The drugs agency detained the German in the Kerobokan area of Bali along with the transgender woman, in a house where authorities also found the rudimentary drugs laboratory.

The two others were detained at different locations in the same area.

Foreigners are frequently arrested for attempting to smuggle narcotics into Bali, a popular holiday destination famed for its palm-fringed beaches, and some have been sentenced to death.

But secret drug laboratories are more of a rarity.