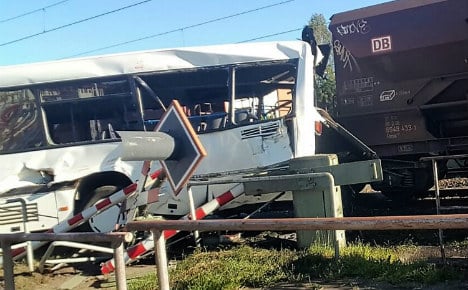 The crash took place at around 8.30am when the train hit the back of the bus which stood stationary on the tracks, according to the Neue Osnabrücker Zeitung (NOZ).

NOZ initially reported that the bus was a school bus, but police now confirm that it was a rail replacement bus. The collision took place within the vicinity of a train station at Melle-Westerhausen.

The bus had stopped to let people on and off the bus, but still had its rear end on the tracks. When a passenger alerted the driver to the oncoming train, he tried to close the doors. But when they failed to close he was unable to move the vehicle, NOZ reports.

Emergency services arrived at the scene and deployed two helicopters.

About 15 passengers were on the bus at the time of the collision, according to police. Ten people were injured in total, including both the bus and train drivers, and two of the ten were seriously injured.

NOZ reports that one of the seriously injured people was flown to a hospital outside of Osnabrück, while the other was driven to a hospital within the city. Others who were injured were treated by paramedics at the scene, or at a nearby clinic.