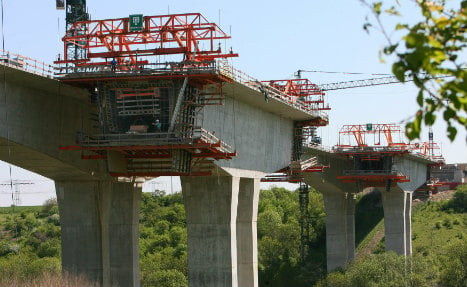 When the 156 metre-long bridge opens in October, it will send engineers data around the clock, giving them an understanding of the structure which they never had access to before, Nordbayern.de reports.

Sensors built into the bridge, which is on the Autobahn 9, will analyze data such as the strain, movements and inclinations of the bridge, as well as the temperature, humidity and pressure from the vehicles.

Experts will then be able to tell the state of the bridge according to the data they receive, with the aim of discovering damage before regular tests.

The bridge in Nuremberg will be tested out as a five-year pilot project to determine whether it might also work in the rest of Germany, according to Nordbayern.de.

The new bridge is part of the “Digital Autobahn Test Field,” a project which the government is developing along with Siemens.

The Federal Transport Ministry hails the project as the next great step in automobile history, claiming it will ensure Germany's position as a leader in transport technology.

The ambitious end goal is that all cars will travel autonomously of drivers. But that is not likely to happen for at least 20 years, project coordinator Marcus Zwick told Nordbayern.de.

Before then though, project leaders hope it will reduce traffic jams and collisions.

Digital sensors placed at the roadside will communicate with software in ‘intelligent cars’, which will also communicate with one another, creating an integrated traffic network in which traffic and accident warnings can be sent out in real time.

Another advantage of the project is that it could reduce the number of Geisterfahrer – ghost drivers, or those who enter the road on an exit and drive against the flow of traffic.

By warning these people and other drivers of the mistake they are about to make, the system will increase safety for what is a recurrent problem on German roads, the transport ministry says.

The digital project also involves introducing free Wi-Fi access in six different parking lots of the north Bavarian region which will be available from mid-November.