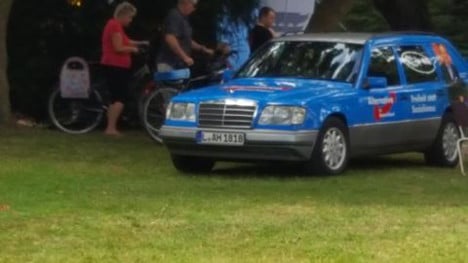 A Facebook group dedicated to opposing far-right groups in Leipzig posted a picture on Facebook on Sunday that has been riling up anger in the eastern city.

The picture shows what appears to be an AfD campaign car decorated with the official party logo and pictures of candidates parked at an outdoor festival with a front license plate that reads “AH 1818”.

The group NO LEGIDA – a reference to a local section of anti-Islam movement Pegida – points out that AH refers to the initials of Adolf Hitler and 18 refers to AH again as the first and eighth letters of the alphabet.

These are common symbols used by neo-Nazi groups and such a combination of the letters and numbers on license plates is forbidden in Bavaria.

The post has been shared more than 750 times over the past two days. Some seemed shocked that such a license plate combination would be allowed.

“Is that license plate real or faked?” wrote one Facebook user. “I must ask myself, who could be so stupid?”

“The fact that it’s with the AfD doesn’t leave any doubt for me that this was not a coincidence,” wrote another.

In response, the Facebook page for the AfD in Leipzig wrote: “Our friends from the left-spectrum are stirring up hatred again about what a vehicle says, and they’re seeing Nazis everywhere, like paranoid.”

The chair of the local party branch, Siegbert Droese, tried to distance the party from what he said was a mistake. He explained in a statement on Monday that the car did not belong to the AfD, but rather was only for him to use, according to local broadcaster MDR. He also said he did not notice the license plate’s significance.

“Thanks to social media, we discovered the meaning of the letters and numbers and their politically explosive nature,” Droese said.

“We want to very clearly distance ourselves from these kinds of far-right scene codes.”

Saxony state parliament representative for the AfD Uwe Wurlitzer told Vice magazine Germany that the car belonged to Droese and that he planned to discuss the matter with him.

Vice also points out that this isn’t the first time the party in Leipzig has been caught connected to neo-Nazi symbols.

The party also has experienced divisive infighting recently after a book by one of its members surfaced which described the Holocaust as “certain infamous actions” and Holocaust deniers as dissidents. Critics saw this reference as a trivialization of the Holocaust, and one prominent AfD member called it “a clear case of anti-Semitism”.