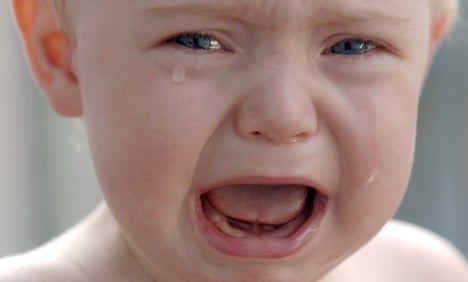 If you’ve ever thought that babies in Germany sound just a bit more German than those crawling around in other countries, you’re not just hearing things.

Researchers at the University of Würzburg found in two different studies that even newborns cry differently depending on their mother tongue, the team announced on Friday.

Specifically the studies compared the way babies cried in Germany to infants in China and Cameroon – two countries where people speak tonal languages, or languages where the tone changes the meaning of the words.

The researchers recorded the cries of 55 newborns from China and 21 from Cameroon during their first days of life. The team wanted to see whether a pregnant woman speaking her native tonal language would have an impact on her newborn’s cries.

And they found that in fact there was a difference.

“The crying of neonates (newborns) whose mothers speak a tonal language is characterized by a significantly higher melodic variation as compared to – for example – German neonates,” said lead researcher Professor Kathleen Wermke, in a statement.

Babies from Cameroon whose mothers speak Nso had a significantly higher overall pitch variation in their cries, and also the rise and fall of tones during a cry was more intense than German babies.

Chinese babies whose mothers spoke Mandarin also had similar results, though the difference from German babies was not as dramatic.

Language starts in the womb

The scientists said that the findings supported a theory that they had already considered: that language actually starts in utero. Fetuses have “ample opportunity” to be exposed to their mother tongue during the third trimester and after birth their crying reflects their environment, especially the language of their mother.

“Building blocks for the development of the future language are acquired from the moment of birth, and not only when infants begin to babble, or to produce their first words,” explained Wermke.

But even though we may start learning our mother tongue before birth, this doesn’t mean we should feel locked into one language.

“It remains undisputed that neonates are able to learn any language spoken in the world, no matter how complex it is,” Wermke said.

That means there’s no need to give up on German just yet – even if the learning it makes you cry.