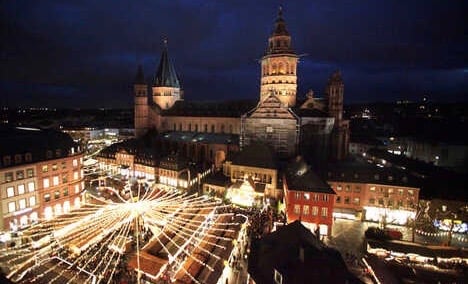 In most west European states, power has been centralized around one city for centuries.

In England, London (or more accurately Westminster) became the seat of power in the 12th century. Madrid became capital of the Spanish kingdom in 1525. Lisbon was named home of Portuguese government in 1255.

But Germany is an exception. From the Middle Ages through to modern times, power shifted between various cities, while Berlin was a latecomer to the party, only really gaining prominence in the 18th century. The westernmost city of the Federal Republic of Germany, Aachen, is also known as Aix-la-Chapelle in English.

While it is relatively insignificant today, the city was the residence of medieval king and emperor Charles the Great, whose kingdom stretched over regions now belonging to France, Luxembourg, Belgium, the Netherlands and Germany.

Charles the Great, or Charlemagne, was crowned Emperor of the Romans in 800 by Pope Leo III in the Vatican. After his coronation, the sovereign made Aachen the capital of his empire.

The chapel of the palace financed by the emperor later became the cathedral of the city. It is one of the oldest cathedrals in northern Europe and from 595 until 936, it was the place of coronation of German kings and queens.

After his death, Charles the Great's kingdom slowly dissolved, but it gave birth to another empire 162 years later. Otto I revived the title of Charlemagne and was crowned Holy Roman Emperor in 962 after creating the archbishopric of Magdeburg.

The Holy Roman Empire had no fixed capital, as each king travelled between residences. Nonetheless, each of the rulers had their preferred place of court, and in the case of Otto I, it was Magdeburg.

With more than 20,000 inhabitants, the medieval city became one of the most important power centres of the new empire. After his death, Otto I was laid to rest in the abbey and his tomb can still be seen in the impressive cathedral built on the location of the abbey.

After a marriage to the Byzantine princess Theophanu, the “King of the Germans'” influence even spread as far as Constantinople, modern day Istanbul.

While Magdeburg's importance is rather diminished a millennium later, it is still the state capital of Saxony-Anhalt. Now state capital of Rhineland-Palatinate, the southwestern city was founded by the Romans a decade or so after the birth of Jesus.

Quickly growing in importance, likely due to its position at the confluence of the Main and Rhine rivers, Mainz became provincial capital of the Roman Germania Superior.

But it was in the middle ages that its influence reached its zenith.

During the Holy Roman Empire, the archbishop of Mainz was one of the seven “Prince-electors” – the council who collectively elected new rulers of the vast empire, which at its height spread from the Baltic Sea to southern Italy.

But Mainz was first among equals in the electoral council.

The archbishop was president of the electoral college and arch-Chancellor of Germany. He was also considered Primas Germaniae, the Pope’s highest representative north of the Alps.

To this day, the archiepiscopal See of Mainz is the only other Western location outside of the Vatican recognized under the title of Holy See. Today Cologne has no political relevance in Germany at all, as arch rival and neighbour Düsseldorf is capital of Germany's most populous state, North Rhine-Westphalia.

Even during the Cold War, when Berlin was cut off by the forces of Communism, the Cathedral City watched on as little brother Bonn was made capital of West Germany.

Both of these facts are somewhat puzzling. Cologne is not only the largest city on the Rhine (it has just over a million inhabitants, as opposed to Düsseldorf's 600,000 and Bonn's 300,000), it is also demonstrably the most important of the three historically.

The city's world-famous cathedral is a glorious reminder of its heyday, when the archbishop was one of the seven Prince-electors of the Holy Roman Empire.

From the 11th century onwards, the archbishop was made arch-Chancellor of Italy, one of the three component kingdoms of the empire (the others being Germany and Burgundy). As such he was in charge of imperial affairs in the kingdom – and in the whole empire his importance was second only to that of the archbishop of Mainz.

The monstrous cathedral is a testament to the power and wealth of the city. Its foundation stone was laid in 1248, but the last piece of the puzzle was put in place 632 years later. Trier was the third city which had an archbishop as Prince-elector. And, as arch-Chancellor of the Kingdom of Burgundy, he was the third member of the council to have administrative power over a kingdom.

It is arguably the most ancient city in Germany, having been founded by Celts in the late 4th century BC, and is the oldest place north of the Alps to have a bishop. Visitors to the cathedral may spot graffiti and mason's signatures that were drawn no less than seven centuries ago.

Today Trier only has a population of a little over 100,000 people, but it still has nine UNESCO world heritage sites, including the cathedral, a Roman bridge, Roman baths and amphitheatre. Cologne, Trier, and Mainz were capitals of important states and ruled kingdoms in the empire, but some cities such as Speyer temporarily had more prestige within the empire. Once elected, the sovereign could choose the seat of the empire, which could be wherever he preferred to live.

In 1027, Conrad II rose to be emperor and by 1033, he was King of Italy, Germany and Burgundy. Conrad came from Speyer and Worms, and upon rising to the throne ordered work to start on a magnificent cathedral in Speyer, which is now a UNESCO world heritage site.

In efforts to secure his claim to the throne Conrad, spent much of his life on the road, touring Germany and later Italy. In fact, he hardly seemed to be at home in Speyer at all. But when he died of gout in 1039, his remains were brought back to the cathedral and buried there. Cities were usually capitals of a certain territory. However, some cities were independent states. The case of Nuremberg is truly exceptional: it was both an independent city-state and the “unofficial capital” of the Holy Roman Empire.

While Nuremberg may not have been capital in name, imperial assemblies were regularly held there and in 1356, Charles IV decreed that all new kings had to hold their first assembly there.

The imperial court also worshiped at the town’s Frauenkirche, which was built between 1352 and 1362.

The conservation of the various monuments to this day is truly astonishing. The imperial castle still dominates Nuremberg and gives an idea of how powerful the city was during the Middle Ages.

The end of the Empire

In the later years of the Holy Roman Empire, the balance of power progressively shifted from the emperor to local rulers, and in 1806 the empire dissolved altogether.

By this stage Berlin had already been capital of the Prussian state for over a hundred years and Prussia had become a major European power. Thanks to the efforts of Otto von Bismarck, it established itself as the core of the modern German state, and Berlin was made capital of modern Germany in 1871.