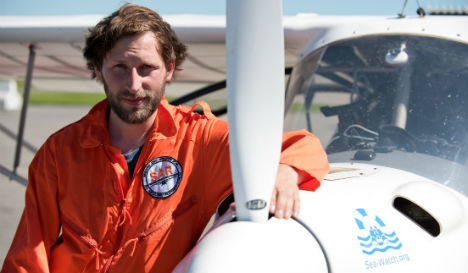 “We were on our vessel for several days and there were other rescue services present at sea, too.

“Even for all of us together, though, it was hard to cover the whole area. And when we finally found a boat of refugees, two of the people in there had already died of exhaustion.”

Ruben Neugebauer, a 26-year-old volunteer from Berlin, is talking to The Local about a recent mission he was on in the Mediterranean with German NGO Sea Watch, an organization which tracks down refugee boats making the dangerous crossing from Africa and Asia into Europe.

It was at this point that the NGO decided it needed to up its capabilities.

“We are not flexible enough with the boat alone,” explains Neugebauer, who is also a photographer and journalist. “We want to get an overview of the area – and if we use a plane we can easily do that in one and a half hours.” The new member of the Sea Watch team. Photo: Private.

So the young Berliner decided to put his pilot's licence to good use and offered to help Sea Watch with its plans to start scouring the waves of the Med from the skies.

Sea Watch had been crowd-sourcing donations to fund their work and decided to use some of these funds to buy a €42,000-microlight aircraft, which Neugebauer and other pilots with the group planned to fly.

The plane was based in Tunisia and the plan to start looking for refugees from a bird's-eye view was all set to go, until Sea Watch ran into some problems with Tunisian authorities.

“They initially gave us the permission, but then they withdrew it,” according to Neugebauer. “I assume the Tunisian government is wary of getting involved in this critical area.”

Sea Watch was, however, able to get another bigger chartered plane. Neugebauer is set to take off in the charter plane in two weeks, though as a co-pilot since he doesn't have a permit to fly this type of aircraft.

“I'm only allowed to co-pilot the charter plane, but that's OK because it's not about me flying. It's about the project.”

Although the high point of the refugee wave might be over, so far in 2016 almost 263,000 refugees have arrived in Europe by sea.

And while no single disasters on the scale of the two which killed over 1,000 people in April 2015 have taken place this year, 3,177 have died or gone missing during the crossing since mid-May 2015.

The European Union has a mission in the Mediterranean called Triton – a replacement for a more ambitious Italian programme – but it has been heavily criticized as drownings rose sharply after its implementation.

Neugebauer too says that EU military helicopters and aircraft could do more to help in coordination.

“They are generally more concerned with catching refugee smugglers,” he says.

“Sometimes they come and help, sometimes they do not even respond to our requests, they do their own mission and we can´t rely on their assets. That's why we have to do it on our own.”

The independent Sea Watch was started in 2014 by several families from the state of Brandenburg, and the group says it aims to “fill the hole… of institutionalized sea rescue missions”. The Sea Watch vessel out on a mission. Photo: Private

Collecting funds only from private donations, the group bought an old, refurbished fishing vessel which the group reports they have used to pull over 2,000 people from the Mediterranean.

This year the organization replaced its old vessel with a more weather-resistant one, allowing for around-the-clock operations.

Despite successes, volunteers are also often confronted with harrowing tragedy.

“Three weeks ago we found a wooden boat out on the sea. Fifteen people on it had died from gases coming from under deck,” Neugebauer recalls.

That’s why the Sea Watch team has provides services to help its members deal with the psychological strain of their missions.

“We are seeing many depressing things, and we have to learn how to deal with them,” he says.

“But we are working with professionals and doing supervisions.”

To Neugebauer, the European Union bears a large part of the responsibility for the refugees' plight.

“This is a human catastrophe, and the EU is running an isolationist strategy,” he says. “The EU has the ability to end the suffering. Instead, they’re forcing people to put their lives on the line.”

But Neugebauer feels that he has the responsibility to intervene in the crisis.

“Later generations may ask me what I was doing while the EU willingly and knowingly let thousands of refugees drown out on the Mediterranean,” he recently said in an interview with the German “Jetzt” magazine.

“I don’t want to have to say: I was chasing Pokémon with my smartphone.”

Sea Watch mission off the coast of Lesbos on December 16th 2015.
By Max Bringmann