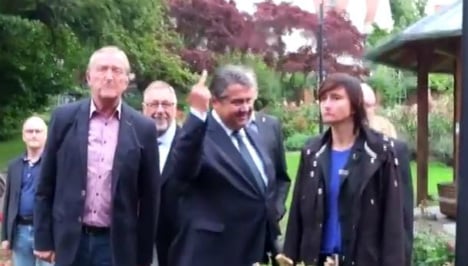 Gabriel was at a visit to Lower Saxony on Friday, when he was accosted by a group of masked protesters holding banners bearing the slogan “Traitor”.

“Man, your father loved his country, and what have you done to it? You're destroying it,” a protester could be heard saying on the video, in a reference to Gabriel's father, who was a Nazi.

The Social Democrat leader, who has publicly condemned his father as a “die-hard Nazi”, turned to face the protesters with a smile, before making the vulgar gesture, which is German is called the Stinkefinger.

His party has confirmed the authenticity of the video posted on Facebook by a youth group linked to the neo-Nazi NPD.

Gabriel is not the first Social Democrat leader to be seen making the gesture in public.

Former finance minister Peer Steinbrueck sparked a storm of derision and online ridicule in 2013 by allowing himself to be photographed making the vulgar middle-finger gesture.

Support for the Social Democratic Party has been falling in recent months, partly due to the rise in popularity of the AfD.