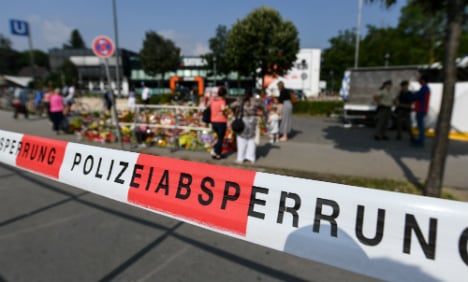 “Clearly he didn’t want to kill anyone else,” a spokesperson for Bavarian state police said on Wednesday. “There could have been more victims.”

Investigators have established that the 18-year-old David Sonboly entered an apartment block in which he met several residents in the stairwell after he had already gone on his rampage in and around the Olympia shopping mall.

But at this stage it appears that the teen was no longer carrying the handgun which he had used to kill his victims. Residents whom the police spoke with said they did not see a weapon in his hand, the spokesperson said.

Sonboly had “a completely normal conversation” with them, with one even asking if he could help him, according to the spokesperson.

“They didn’t know who they were dealing with,” the spokesperson said, adding that Sonboly had no known connection to the apartment block.

“It is probable that he simply found the door open.”

On July 22nd, the 18-year-old started his killing spree in a McDonald's in the north of Munich before entering the Olympia shopping mall. As well as murdering nine people, he injured a further 36 individuals, all of whom have now been released from hospital.

Until this point little has been known about what the teen did between the attack and the point two hours later when he killed himself.

Now, almost four weeks on, investigators have been able to largely reconstruct his movements.

At first he ascended to the first parking level of the shopping mall where he fired 17 shots into a parked car. He then climbed the stairs to the roof of the building where he engaged in an argument with a man on a nearby balcony, investigators say.

Video footage of the argument appeared on the internet on the night of the shooting. In it, the other man can be heard insulting him with a racist insult for Turkish people, before Sonboly replied that he was German.

At this point two police officers caught sight of him and one attempted to shoot him, but missed.

Sonboly was then able to escape from the shopping mall via outside stairs and went to Henckystrasse where he entered the building in which he met residents in the stairwell.

Investigators believe he then hid “for a long time in the underground garage”. Immediately after he left the garage he was confronted by several policemen on the street and shot himself in front of them.

German media reported on Tuesday that special police forces had arrested a man suspected of selling Sonboly a gun via the darknet.