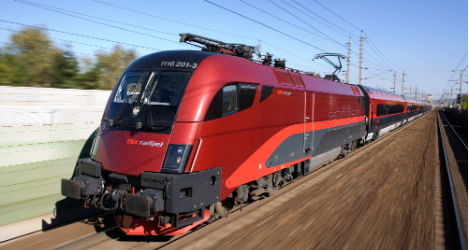 The incident happened at 6.30am on a regional OeBB train heading towards Bregenz in the western Austrian state when the 60-year-old man stabbed the two passengers with a knife.

“The man did not have a migration background. He is by all accounts mentally ill and we are largely excluding a terrorist act,” police spokesman Horst Spitzhofer told AFP.
According to vol.at, police on patrol were able to step in and arrest the man while he was still on the train, although he reportedly resisted arrest and officers were forced to use pepper spray. He was then taken away after the train pulled in to the Sulz-Röthis station.

According to the police, two victims suffered considerable injuries and were taken to hospital. Reports in vol.at suggest one of the victims was a 19-year-old sitting opposite the suspect who was stabbed in the stomach. The German is then thought to have attacked a 17-year-old, injuring them in the throat.

A 22-year-old passenger who helped the police detain the suspect also received an injury to his hand.

The investigation is ongoing.

The attack came days after a 27-year-old Swiss national went on a knife rampage on a train in Switzerland, killing one passenger and injuring five. Austrian police have ruled out any link between the Swiss attack and today's incident.