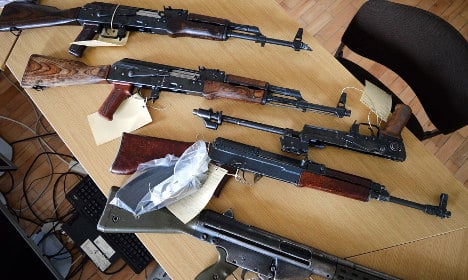 Witnesses tipped off authorities who then said they conducted thorough investigations before searching the home of the 17-year-old, police reported on Monday.

They found five Kalashnikov assault rifles, one HK G3 rifle, and one Uzi machine pistol, as well as live ammunition, according to the newspaper.

Some of the guns appeared to be so-called “decorative weapons”, but were then made to shoot again. Officials are now investigating where the guns came from.

The teen did not have a weapons permit and was arrested for violations of the Weapons Act.

The newspaper reported that a young man the teen had been chatting with online had been the one to inform police about the 17-year-old's troubling actions: he had said that while he had qualms about shooting a cat, he would not feel the same way about people.

At another point, the two had talked over Skype and the chat partner had noticed numerous weapons behind the teen.

The teen then mentioned how he wanted to “have control, loved torture and wanted to build bombs”, local judge Andreas Spahn told the Ostthüringer Zeitung. That’s when the young man alerted police.

In 2013, the teen had appeared before a juvenile court after he went to a child daycare facility wearing a balaclava and carrying an airsoft gun.

Spahn described the teen as unstable, living a withdrawn life without many friends.

Germany has been on edge since an 18-year-old last month shot and killed nine people in a shopping area in Munich with a gun he likely bought on the “darknet”.