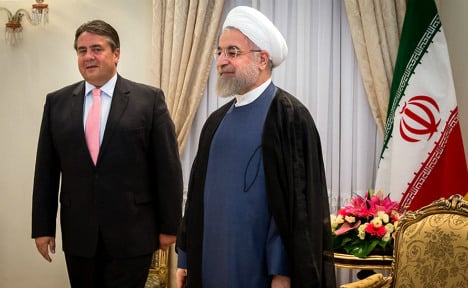 Despite increased foreign trade, there is a certain disillusionment,” Volker Treier, chief economist at the German Chambers of Commerce and Industry (DIHK), said.

German exports to Iran had increased 11 percent in the first four months of 2016 to €890 million, and likely stood at over one billion euros in the first six months, Treier said.

That leaves a lot of ground to make up if firms are to match DIHK forecasts of €5 billion of exports annually within three years of the deal, mounting to €10 billion within five years.

“There is definitely headroom for expansion,” Treier acknowledged, although he rejected any suggestion that German firms might be disappointed with performance so far.

Growth could be even more vigorous in the second half of the year, he went on.

In the long-negotiated deal struck last July, the United States, Britain, France, Germany, Russia and China agreed to lift some economic sanctions against Iran in exchange for the Islamic republic curbing its nuclear programme.

German carmakers and machine-tool builders were among the firms most avid to leap into the new market, where their products had been sought-after rarities until the deal came into force in January.

“Of course the expectations were high that trade with Iran would return to where it was in the old days,” Treier said, but “we're far removed from that”.

With many Western banks still reluctant to issue loans for deals involving Iran – fearing to fall foul of continuing US sanctions against Tehran's financial sector – cash to fuel the business is hard to find, the DIHK said.

But some German household names are already making inroads into Iran's economy, with Daimler planning a factory to build Mercedes-Benz cars with two local partners, while Siemens has licensed gas turbines and power station generators to Iran's Mapna.