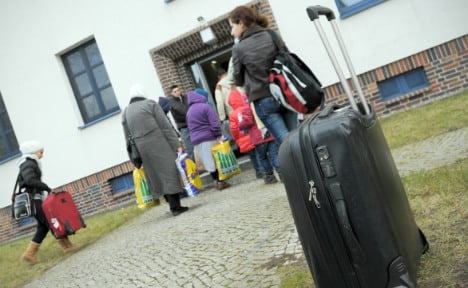 Quite how the 31-year-old ended up spending over a week in a refugee home in Dülmen, North Rhine-Westphalia, is not totally clear, broadcaster WDR reported on Monday.

But it appears that he has the German Red Cross (DRK) to thank for finally freeing him from his ordeal.

Indeed, if it hadn’t been for the fact that the smartly dressed man didn’t seem to fit in the refugee home, who knows how long he would have spent there.

DRK worker Christoph Schlütermann was the first to notice that the apparently wealthy man wasn't your normal asylum seeker. But when he tried to communicate with the man, something got lost in translation. Even the use of hands and feet didn't help the DRK worker come closer to understanding why the man was there.

Stumped, Schlütermann went to a local Chinese restaurant where they advised him to use an app on his phone to ease translation.

When he went back to the man armed with a German-Mandarin translation app, it soon became clear: the man wasn’t looking for asylum, he wanted to get to Italy and France.

“I spoke into the app in German and the phone translated it into Mandarin. But when I received his reply, I got the curious response ‘I want to go walking in Italy’,” Schlütermann told the Dülmener Zeitung on Sunday.

The spectacular mishap began in Heidelberg, almost 400 km to the south of Dülmen in Baden-Württemberg.

While on a visit to the picturesque university town, the 31-year-old from Beijing noticed his wallet was missing.

But instead of signing a stolen item complaint at the local police station, as he thought he had done, the poor tourist ended up signing an asylum application at a different official office, likely the town hall.

As he sat there waiting for the cops to file his complaint, the German authorities started a completely different process.

First they took his passport and gave him refugee documents instead.

He was then transported almost 300 km to Düsseldorf in the west of the country, before being taken a further 100 km north to Dülmen.

At this point the young man still apparently complied with all the regulations which German authorities put refugees through: he allowed them to take his fingerprints, he went through a medical check, and accepted the pocket money which the camp authorities handed out.

Even after the DRK realized the mistake, it took several days before it could be officially confirmed, as on his arrival in Germany his details had not been correctly documented.

But when the asylum application was finally cancelled and the young man set off for southern Europe, he did not even lodge a complaint against the German authorities.

Whether he managed to take that walk in Italy in the end is not yet known.