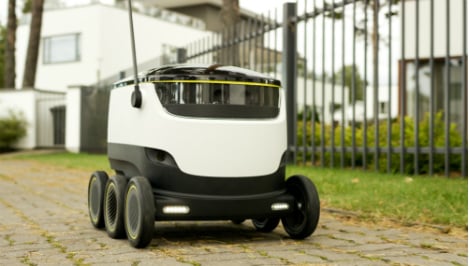 Robots and drones could be Germany’s answer to home deliveries in the future, as retailers and delivery services such as Hermes are currently testing out new delivery options.

One such innovation is the delivery robot, developed by Estonian-British company Starship and soon to be used by electronics chain Media Markt in the district of Grafenberg in Düsseldorf.

From September, Media Markt will using the robots to deliver packages right up to the door of customers within a five-kilometre radius.

On its six wheels, the robot traverses the pavements carrying packages of up to 15 kilograms. Because its maximum speed is only five kilometres per hour, the braking distance of the robot is only thirty centimetres.

But although the robot has nine cameras which show it the way to go and prevent it crashing into lampposts and passers-by, it is not completely independent: A supervisor is on hand to intervene if their are any issues.

Retail giant Metro, which owns Media Markt, hopes that the robots will provide speedy yet affordable delivery to customers “in almost real time”.

And the electronics chain isn’t the first company to be interested in the new innovation. Delivery service Hermes has also announced that they are testing the Starship robots.

“The use of robots can cause a long-lasting revolution in the delivery of packages and smaller parcels, especially in urban areas,” says Frank Rausch, the CEO of Hermes Germany.

But robots aren’t the only solution. Deutsche Post advocates using drones for delivery, especially in sparsely populated areas, on islands and up mountains, where distributing orders is naturally much more of a challenge than in cities.

DHL, a division of Deutsche Post, began testing out drones in December 2013. At the time, they intended to use the so-called “Paketkopter” solely for the purpose of making medical deliveries and not for anything else.

Earlier this year in Reit im Winkl, a small village in Bavaria, a drone was used to deliver a total of 130 packages in the space of three months. During this time, the drone repeatedly made the eight-kilometre trip from the valley right up into the mountains at an altitude of 1,200 metres above sea level.

Other companies are also interested in the prospect of using drones. Online retail giant Amazon is also working on its own drone delivery system.

However, it is debatable whether drones are the ideal solution for making delivery more customer-friendly.

“People will not like drones,” founder and lead developer of Starship’s delivery robot Ahti Heinla told Tagesspiegel. “Especially if they [the drones] fly over their gardens to bring something to their neighbours. Also, they require a lot of power and are potentially dangerous”.

By contrast, the delivery robots seem to be less intrusive and far safer, as “our robots hardly move any faster than a pedestrian,” Heinla went on to add.

Logistics expert Herbert Kotzab from the University of Bremen doesn’t reckon that the German skies will be full of delivery drones any time soon.

“In special cases – for important replacements or for organ donation – transportation with the help of drones is conceivable. But for the most part, I can’t imagine it happening in the next five years,” he maintains.

The problem is that the necessary infrastructure and suitable control mechanisms are not available at the moment, according to Kotzab.

The expert also has reservations about delivery robots, doubting that customers would be able to cope with the new technology and the issues which could potentially arise.

But it’s not just Kotzab who isn’t 100 percent convinced by the new delivery devices. The majority of Germans are sceptical about such creations, a survey undertaken by consulting firm PWC revealed.

Fewer than one in three Germans can imagine a drone making deliveries, according to the survey. Moreover, three quarters of respondents thought that such technology could cause damage and accidents.

Instead of risking using these new inventions, the majority of customers would prefer to receive their deliveries in the old-fashioned way – by getting parcels delivered to their office.

If their boss isn’t happy with this, customers can always resort to asking their neighbours to take the package for them.