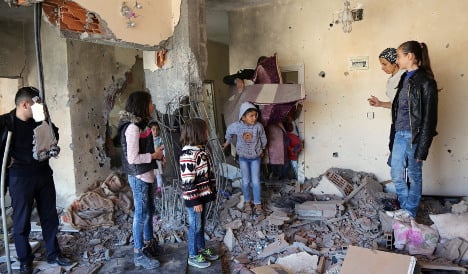 Kurdish people look at the damage to houses the day after clashes between Turkish special forces and PKK militants broke out in Cizre. Photo: EPA/DPA.

In just the first six months of this year, 1,719 Turkish people applied for asylum in Germany, which was close to the total number of Turks who applied in all of last year (1,767), according to figures by the Federal Office for Migration and Refugees (BAMF) sent to The Local.

What is not yet known is the number of people who have applied for asylum since the failed coup attempt in Turkey last month, and since President Recep Tayyip Erdogan has enacted mass detentions of suspected coup supporters.

Most of the asylum seekers between January and June came from Kurdish areas: 1,510 were Kurdish, or nearly 90 percent.

Tagesspiegel, which first published the figures, reported that most of the asylum-seekers from Turkey were fleeing internal conflicts within their borders. A BAMF spokesperson told The Local that they could not confirm the reasons why refugees had fled.

The Turkish government has been criticized internationally for its crackdown on Kurdish areas in response to deadly attacks by Kurdish militant group the PKK after a ceasefire agreement broke down last year.

A group of German MPs in June filed a war crimes suit against Erdogan for his treatment of the Kurdish minority. The suit named in particular an incident in the city of Cizre in the Sirnak province, where NGOs say some 178 civilians were killed in February while taking shelter in basements, and whose bodies were later found burned up – some perhaps burned alive.

The civilians took cover from Turkish artillery fire in a cellar, according to the suit, but despite calls to emergency services, no doctors or journalists were allowed through to see them.

But even given the current tumultuous situation, Tagesspiegel reports that there has been a drop-off in the acceptance rate of Kurdish asylum applications: In the first half of the year, 5.2 percent of Kurdish Turks received positive decisions, with 6.7 percent of all Turks receiving good news.

Last year, 14.6 percent of all Turkish asylum applicants had positive decisions, according to BAMF.

Germany's Turkish population of nearly three million is the country's largest ethnic minority, many of whom came as or are descendants of guest workers through a labour agreement in the 1960s.