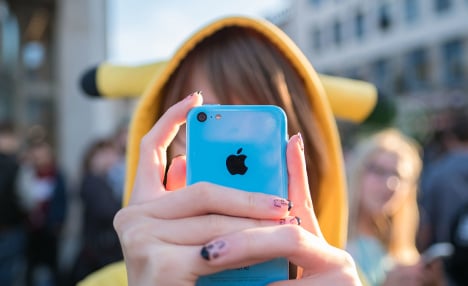 A fan of the game. Photo: DPA

Not only is the train decorated with Pokémon Go branding, the route has been specially designed to give players the optimum Pokémon experience.

The three-hour route takes passengers to the city's best locations for catching Pokémon, and the train drives slowly to allow the players' eggs to hatch.

The unusual transport is the brainchild 27-year-old Martyna Malachowski, who works in the communications department of the local transport office and whose children are Pokémon fanatics, local newspaper Rheinische Post reported.

Malachowski herself is on Level Ten of the game, so she knew just how to appeal to fellow players, and decorated the train herself.

The Pokémon Train set off on its maiden journey at 4pm on Thursday afternoon, and all 90 tickets for the experience had been booked by eager fans of the game by Nintendo. It's not yet clear if it will make another trip – but it hasn't been ruled out.

Here's the Pokemon Train in all its glory:

Not everyone in the city has enjoyed the game though. Like in many other places, Düsseldorf has seen fans of the game congregate in popular spots, including Girardet-Brücke, a bridge with 'pokestops' at either side.

City authorities had to close the bridge to prevent traffic accidents and allow gamers to play in peace, Die Welt reported. Extra portaloos were also set up to allow players to relieve themselves.

And in Hersfeld-Rotenburg in Hesse, access to the main train station was blocked by more than a dozen cars on Wednesday evening while the drivers played Pokémon. Police issued verbal warnings to the gamers who then left, according to a police report.