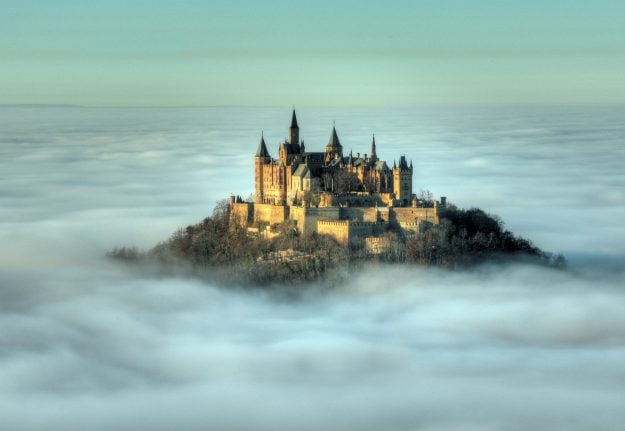 Nestled into the alpine foothills near lakes Schwansee and Alpsee, Neuschwanstein Castle is probably Germany’s most famous. Located near Füssen in southwestern Bavaria, the sparkling white fairytale fortress, built by mad King Ludwig II, inspired the castle of Walt Disney’s Sleeping Beauty. The “Swan King“ began construction in 1869, but experienced no happy-ever-after – before the castle was finished, Ludwig drowned mysteriously in Lake Starnberg. Bellevue Palace, a sprawling white landmark on the bank of Berlin’s Spree River, has a modern political function in the days when most such buildings are largely tourist attractions: it has been the official residence of the president of Germany since 1994. As long as the President is present in Germany, the presidential standard is flown atop the palace – Germany’s own 'white house'. When the president is away, the flag is lowered until his return. An imposing ivy-covered pile of ruins, Heidelberg Castle is one of the top attractions for visitors to its namesake city in Baden-Württemberg. The first stop on Heidelberg’s funicular railway, the castle acts as gateway to the Königstuhl (King's Seat), the highest lookout over the old town and surrounding areas. Even in disrepair, Heidelberg Castle has been a muse for authors and poets over the centuries, including Victor Hugo and Mark Twain. Hohenzollern Castle, still privately owned by descendants of Germany’s royal line, dates back to the 11th century, though it’s been reconstructed twice over its long history. Perched atop Mount Hohenzollern at 855 metres (2,805 ft) above sea level, the castle’s towers and fortifications cut a distinct outline along the foothills of the Swabian Alb, a low-lying mountain range. Almost 1,000 years of history reside within Wartburg Castle, which overlooks the town of Eisenach in Thuringia. Most famously, the castle played a crucial part in the development of Christianity in Germany in the 16th century. The monk Martin Luther spent months in protective custody at Wartburg, during which he translated the Greek New Testament into German in ten weeks. In 1999, the castle was named a UNESCO world heritage site. Schwerin Castle is beautiful and practical – the elaborate building has housed Mecklenburg-Pomerania’s state parliament since 1990. Not only is Schwerin Castle a complex building, but its location – on an island between the Burgsee and Lake Schwerin – sets it apart among German castles. But guests should beware of the legendary Petermännchen, a tiny ghostly castle watchman rumoured to roam the halls, rewarding the good and punishing evil-doers. A short S-Bahn ride outside of Berlin, the palace of Sanssouci ('no worries' in French) was built in Potsdam by Frederick the Great in the mid-1700s as an escape from his stressful city life. Situated on top of a terraced vineyard, the golden Rococo-style castle overlooks extensive parks and gardens, which cultivated wine, figs and plums. In 1990, the palace was named a UNESCO world heritage site. The Castle of Eltz, a sturdy medieval fortress built in 1157, has never been destroyed. In the mid-1200s, the castle property was split among three lines of the Eltz heirs, whose descendants still own the castle today. Composed symmetrically with its surroundings, the fortress towers 70 metres (230 ft) above the Eltz River. Eltz Castle was featured on the German 500 Deutsche Mark note for almost 30 years (1965-1992). The impressive Löwenburg castle amidst Wilhelmshöhe Berg Park in Hesse mimics a medieval fortress fallen into disrepair. But Löwenburg was built around 1800, centuries after the castle-building craze had ended. Styled into artificial ruins, Löwenburg’s outer facade concealed the ornate baroque interior. The surrounding hill park – the largest in Europe – includes an intimidating Hercules statue crowning the hilltop and an elaborate water feature cascading down the mountainside. Albrechtsburg Castle, in eastern Saxony, was commissioned in 1470, by joint rulers Ernest and Albert Wettin. Although the structure could hold two courts, it remained largely empty until after Johann Friedrich Boettger developed the first European porcelain – and a royal decree established a porcelain factory there in 1710. All manufacturing occurred within the Albrechtsburg castle until the factory’s 1863 relocation.