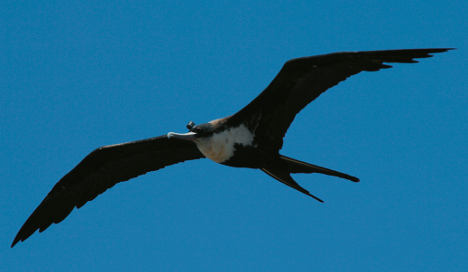 Scientists at the Max Planck Institute in Seewiesen, Bavaria, announced on Wednesday that they had proved for the first time that birds can fly while sleeping and still stay aloft.

The researchers were able to monitor the brainwaves and movements of great frigatebirds from the Galapagos Islands, whose airborne journeys may last for months. They strapped devices to the heads of female birds to measure brain activity over the course of ten days.

They found that these winged wildlife require less sleep while making their long flights over the ocean than they do on land, the scientists wrote for the journal Nature Communications.

“It is commonly assumed that flying birds maintain environmental awareness and aerodynamic control by sleeping with only one eye closed and one cerebral hemisphere at a time. However, sleep has never been demonstrated in flying birds,” the researchers wrote.

The study found that the birds slept roughly 42 minutes per day, which is a fraction of the more than 12 hours of sleep they normally get while on land.

“In addition to establishing that birds can sleep in flight, our results challenge the view that they sustain prolonged flights by obtaining normal amounts of sleep on the wing,” the researchers wrote.

Sometimes the birds were in a way half a sleep: one hemisphere of their brains would be awake to detect potential threats with the respective eye open.
“The frigatebirds may be keeping an eye out for other birds to prevent collisions much like ducks keep an eye out for predators,” said lead researcher Niels Rattenborg.
But the birds were also at times able to keep both brain hemispheres asleep without crashing.

What remains unclear is why the birds maintain such low amounts of sleep, even at night when they don’t need to be alert to hunt.

“Why we, and many other animals, suffer dramatically from sleep loss whereas some birds are able to perform adaptively on far less sleep remains a mystery,” Rattenborg said.