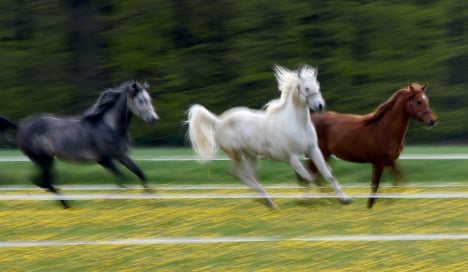 Police received a call in the early hours of Sunday about a group causing chaos around the town of Holzminden, Lower Saxony.

But it wasn’t drunken young revelers that were causing the fuss at roughly 1.30am – it was a band of horses.

Locals reported to police that groups of horses were galloping freely through the streets in the area after some 49 stallions broke free from a wildlife park.

The equine frenzy resulted in one police patrol car being damaged by the animals, though not significantly, and another car was “literally trampled down” by the steeds and pushed into a ditch, likely meaning a total loss to the owner, who was one of the managers of the park according to police.

In total, police said that there were three traffic incidents involving horses and cars.

Luckily no humans were hurt in the course of the stallions’ stampede, but one of the horses had to be euthanized due to the severity of its injuries while two other animals were also taken to a veterinarian clinic.

Preliminary investigations showed that the horses had knocked down a portion of the fence around their pasture. But police reported that it is not yet clear what caused them to make a run for it.

“It is still a mystery as to why the young stallions were in such a panic that they broke out of the field,” police wrote in a report.

And while police were able to corral some of the fleeing follies using the aid of a helicopter and fire brigades, there are still more on the loose. Authorities are urging anyone with knowledge of the four-legged fugitives to contact police.