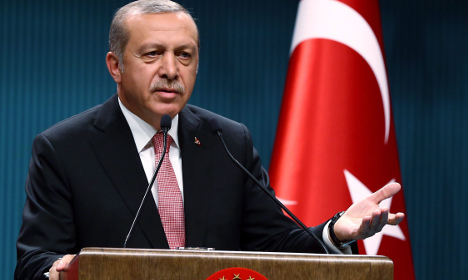 President Recep Tayyip Erdogan has launched a radical purge against anyone suspected of complicity in the coup attempt. Photo: DPA

The deadly July 15th rebellion unsuccessfully tried to unseat President Recep Tayyip Erdogan, who has since launched a radical purge against anyone suspected of complicity.

Turkish authorities blame the coup on US-based preacher Fethullah Gulen and now seek to weed out his followers from all aspects of Turkish life, including the military, legal system, media and education.

An AFP reporter saw 21 journalists gripped by police and marched into an Istanbul courtroom, where prosecutors requested that 20 of them be remanded in custody and one released under judicial supervision.

They were among dozens of journalists and former newspaper staff hit with arrest warrants earlier this week under a three-month state of emergency, to the anger of rights groups.

Foreign Minister Mevlut Cavusoglu defended the detention of reporters, saying it was necessary to distinguish between coup plotters and those “who are engaged in real journalism”.

The probe into coup plotters widened its scope to the financing of Gulen's activities in Turkey, with what appeared to be the first major arrests targeting the business world.

Erdogan meanwhile lashed out at a top US general who had expressed concerns about military relations after the putsch.

Quoted by US media, US Central Command chief General Joseph Votel said Thursday that the coup bid and subsequent round-up of dozens of generals could affect American cooperation with Turkey.

“You are taking the side of coup plotters instead of thanking this state for defeating the coup attempt,” Erdogan said in angry remarks at a military centre in Golbasi outside Ankara, where air strikes left dozens dead during the coup.

Votel swiftly denied any link to the coup however.

“Any reporting that I had anything to do with the recent unsuccessful coup attempt in Turkey is unfortunate and completely inaccurate,” he said in a statement.

“Turkey has been an extraordinary and vital partner in the region for many years. We appreciate Turkey's continuing cooperation and look forward to our future partnership in the counter-ISIL fight,” Votel said, referring to the Islamic State group.

Following a shake-up of the military on Thursday after nearly half of its 358 generals were sacked, the top brass of the reshuffled armed forces met Erdogan at his presidential palace in Ankara.

Ninety-nine colonels have been promoted to generals and admirals, although Chief of staff General Hulusi Akar — who was held hostage during the coup attempt — stayed in his post along with the heads of the navy, land and air forces.

Turkey insisted its military would keep up the fight against IS jihadists and other militants, dismissing concerns that the forces would be weakened.

Prime Minister Binali Yildirim also announced that all military barracks used by the coup plotters on July 15th would be closed down.

According to the state-run Anadolu news agency 49,211 passports have been cancelled and 18,044 people have been detained since the coup.

But a Turkish official said 3,500 of those detained have now been released after questioning.

EU enlargement commissioner Johannes Hahn said he needed to see “black-and-white facts about how these people are treated”.

“And if there is even the slightest doubt that the (treatment) is improper, then the consequences will be inevitable,” he told German daily Sueddeutsche Zeitung.

Turkey has also ordered the closure of a total of 131 newspapers, TV channels and other media outlets, while in total more than 50,000 people have lost their jobs.

Turkey meanwhile warned Kazakhstan over its schools linked to Gulen, a day after a similar warning to the Central Asian nation's neighbour Kyrgyzstan.

In Germany, home to Turkey's biggest overseas diaspora, tens of thousands of Erdogan supporters plan to rally in Cologne on Sunday, following skirmishes between the president's backers and opponents which have put authorities on edge.