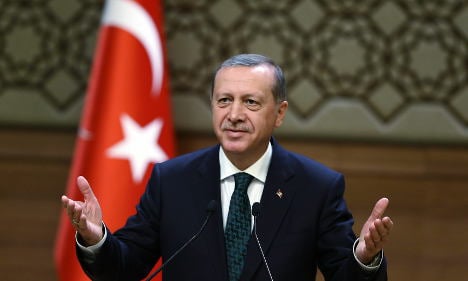 And it is not likely to go down well with President Recep Tayyip Erdogan.

“Erdogan stressed: Even his penis is staging a coup,” taunts the headline of the August issue.

On the cover is a photo of a concerned-looking Erdogan, while a sausage has been strategically Photoshopped over his groin area.

The magazine cover comes as tensions between Germany and Turkey are extremely high. Following an attempted coup on July 15th, skirmishes have broken out between Erdogan's supporters and critics in Germany's large Turkish community.

And since Germany declared the massacres of Armenians by Ottoman Turks a “genocide”, the country's ambassador in Ankara has reportedly been left out in the cold and unable to attend diplomatic meetings.

But German satirists were riling up Erdogan even before diplomatic relations got frosty.

But the poem turned out to violate a seldom used German law against insulting foreign heads of state, and when Turkey formally complained, the government had to decide whether to allow an investigation into Böhmermann to go through.

Merkel later admitted she had made a “mistake” in her handling of the affair, having called the poem “deliberately offensive”, but stood by her decision to allow the investigation.