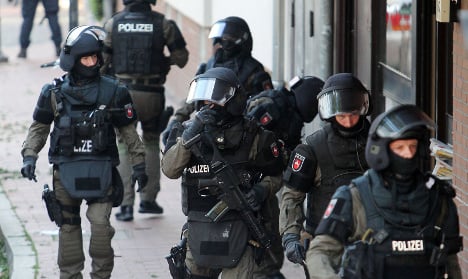 Police entering one of the residences. Photo: DPA

The raid took place throughout the day in Hildesheim, south of Hanover, and finished late on Wednesday evening, a statement said.

“The DIK in Hildesheim is a national hotspot of the radical Salafist scene, which authorities in Lower Saxony have been observing for a long time,” said Boris Pistorius, state interior minister. “After months of preparation, with today's raid we took an important step towards banning the organization.”

Security authorities believe that several young Muslims had been radicalized in the organization and gone on to travel to countries including Iraq and Syria to fight for Isis.

Pistorius said that sermons and lectures held by the mosque called for “hate towards unbelievers”.

“We do not tolerate it when Salafist organizations and their followers ignore our country's rules. We will fight this with all our available legal means – the rule of law is strong,” the minister added. “I am convinced that our freedom is stronger than the inhuman ideology of the extremists.

Around 400 members of the police were involved in the operation, which the statement said is not yet over. Pistorius said that he was confident the operation would be a “complete success”.