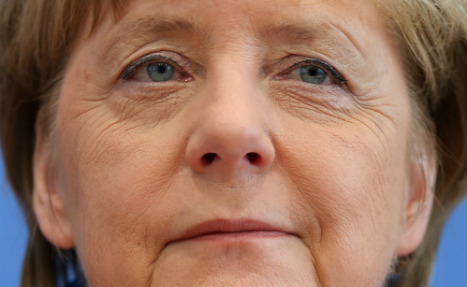 “Wir schaffen das [we’ll manage it],” Merkel said, repeating the famous phrase she uttered almost a year ago which set off a dramatic wave of migration to Germany.

Her government would stick to its course on refugees, but it would also reinforce efforts to fight the causes of the refugee crisis, she said.

“We have already achieved very, very much in the last 11 months.”

Defending her decision to stop applying EU asylum rules to Syrian refugees, she said she had “acted in line with my knowledge and conscience.”

The Chancellor had broken off her holiday in eastern Germany to come back to Berlin and address the nation after a string of bloody attacks, three of which were carried out by refugees, left the country shaken.

“The attacks are harrowing, depressing and depraved,” Merkel said, adding that “terrorists want to destroy our ability to live together harmoniously”.

“They sow hate and fear between cultures and religions.”

“That two men who came to us as refugees carried out the attacks in Würzburg and Ansbach mocks our country,” she said.

Civilizational taboos have been broken, Merkel said, adding that the attacks took place in locations where any of us could have been – a point she had also made after a shooting spree in Munich on Friday left nine people and the gunman dead.

Asked by a journalist if terrorists entering Europe is the price we pay for our humanity, Merkel replied: “We know since at least the Paris attacks that Isis also use refugee routes to smuggle terrorists through.

“We have also know for a long time about the travel routes taken by people who are threats to the state. We need to check all of these routes and also live with the danger of terrorism.”

She refuted that this was the most difficult point in her chancellorship.

“The period after Fukushima also wasn’t easy. But now it’s about a more fundamental question: Will the terrorists succeed in in destroying our values or are we strong enough to find the right answer? That is a big challenge for the whole society.”

The security forces are doing everything they can to discover the full facts about the attacks, she stressed.

The Chancellor also spoke of the concrete measures her government plans to take in response to the attacks, including a desire to create a central agency for information security which would have the ability to decode encrypted communications.

“We will have to redouble efforts to deport people,” she said.

She also pledged that weapons laws across Europe would be sharpened, further research into radicalization would be conducted, and stronger controls on what people do on the internet would be implemented.

“We are talking about a huge litmus test, not just for Germany but for the whole of Europe.”

While the German political class has largely called for calm, opposition parties and rebels from Merkel's own conservative bloc have accused her of exposing the country to an unacceptable level of risk without stricter controls on new arrivals.

“We are awaiting urgent action from the federal government and Europe – now is the time to act.”

The deadliest attack came on Friday when a German-Iranian teenager who was born and raised in Munich opened fire at a downtown shopping mall, killing nine people before turning the gun on himself.

He had been under psychiatric treatment and investigators say he was obsessed with mass shooting, including Norwegian right-wing fanatic Anders Behring Breivik's 2011 massacre.

They have ruled out an Islamist motive, saying the assailant had far-right “sympathies”.

On July 18, an asylum seeker from Afghanistan or Pakistan slashed train passengers and later a passer-by with an axe and a knife in Würzburg before being shot by police.

And on Sunday, a Syrian failed asylum seeker blew himself up outside a music festival, wounding 15 people at a nearby cafe after being turned away from the packed open-air venue. IS claimed both attacks.