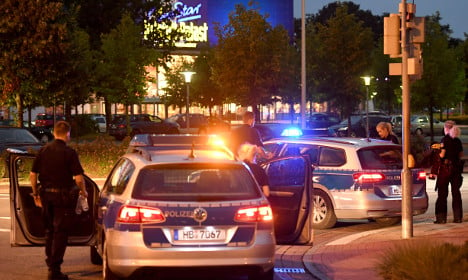 Police outside the mall. Photo: DPA

The man, a 19-year-old Algerian asylum seeker, was described as posing “a threat to himself and others” after he fled from a psychiatric ward on Wednesday morning.

A doctor who tried to follow the man was unable to catch up to him, and as he ran, the 19-year-old is said to have shouted: “I'll blast you into the air”.

He had been admitted to the ward last Sunday after injuring himself several times in police custody, where he had been held over breaking and entering, Der Spiegel reported.

He had allegedly made “threatening remarks” relating to terrorist group Isis and Germany's “general security situation”, as well as the shooting in Munich last Friday which left nine people as well as the gunman dead, police commissioner Arno Zumbach told Bild. The newspaper also reported that he was under the influence of strong narcotics.

After a sighting of the man in the Weserpark shopping centre, police at first tried to locate him in the mall, which contains over 170 shops and restaurants. When he could not be found, the mall was evacuated shortly before 7pm, and police continued to search for the escapee and for any dangerous objects in the mall, with a spokesperson saying there was a possibility that the man had left “explosives or other dangerous items” there.

The 19-year-old was eventually arrested at 0.35 am on Thursday morning after being found at the city's main train station. Meanwhile, no suspicious objects were found at the shopping centre, which opened as normal on Thursday.

After being questioned, the young man was released from police custody, and taken back to the closed psychiatric ward.

Germany is on high alert after a string of violent assaults took place within one week. Earlier in the day, a Rewe supermarket in Bremen had also been closed and the area cordoned off due to a bomb alert, but was later re-opened when nothing suspicious was found.