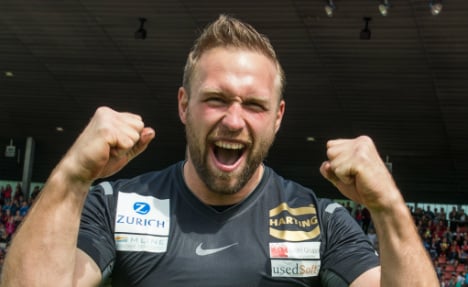 “For me, he is a part of the doping system, not the anti-doping system. I am ashamed of Thomas Bach,” Harting, who has long been a critic of Bach, told SID, an AFP subsidiary.

“Personally, I detest this person more than ever and am very ashamed that I have to work with him indirectly.”

The IOC on Sunday declined to impose a blanket ban on all Russian competitors for the Rio de Janeiro Olympic Games after a World Anti-Doping Agency probe found evidence of a wide-ranging cheating system directed from the top.

The International Association of Athletics Federations (IAAF) has banned all Russian competitors from the athletic's section of the Rio Games, something Harting welcomes as “the correct action. This may be a wake-up call.”

But with less than two weeks before the Games start, the IOC has controversially left the decision whether to ban Russian athletes from the other Olympic disciplines down to the individual sports federations.

Bach defended the IOC's decision saying it “respects the right of every clean athlete around the world” — something Harting passionately rejects.

The 31-year-old, who won the discus gold at London 2012 and three straight world titles from 2009 to 2013, says he has “no interest in feeling the pain” of any clean Russian athletes.

Harting says the IOC's decision is a setback in the battle to drive doping from sport and says he “can't understand the decision” which he finds “simply embarrassing”.

Harting, who will be bidding to defend his Olympic title despite tearing a chest muscle and suffering an inflamed right knee at the start of the year, says under Bach's presidency, the IOC has “reached a new level of disappointment”.

Harting is also disappointed that an IOC ethics commission opted not to allow whistle-blower Yuliya Stepanova, the Russian 800-metre runner who lifted the lid on systematic doping fraud in her country, to compete in Rio as a neutral.

The IOC president hit back at the criticism from his compatriot.

“It is unacceptable to insult somebody for not having the same opinion as you,” Bach told German media agency DPA.

“All who argue in such a way should consider that many others agreed to this decision. The Continental Olympic Associations, athletes commissions; the Executive Board decided unanimously with one abstention. There are different opinions. This has to be respected and this can be discussed. But it is unacceptable to insult somebody in such a way.”

Harting is not the only German annoyed with Bach.

In protest at the IOC decision, Hans Wilhelm Gaeb, the 80-year-old former president of the German Table Tennis Association, says he will give back the Olympic Order, which was awarded to him in 2006 by Bach.

“I think the decision is the severest blow to the integrity of sport and the Olympic principles,” Gaeb said in a statement to SID.

“I don't want to wear the recognition of an organisation which betrays the ideals of sport.”

Gaeb branded the IOC's decision not to allow Stepanova to run in Rio as a “shameless act and a unique tribute to power politics”.