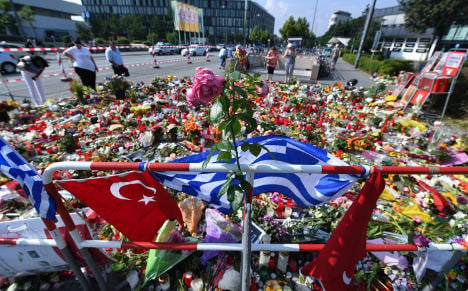 Flowers for the victims. Photo: DPA

Seven victims of the lone attacker were Muslim; the majority were teenagers and they were of different nationalities, including one Turkish woman and two German-Turks. They lost their lives when an 18-year-old, of German-Iranian dual nationality, began shooting at a Munich shopping centre before turning the gun on himself after at first trying to flee from police.

It is not yet clear whether the perpetrator deliberately targeted foreigners; only two of the nine victims were native Germans, with others coming from Kosovo, Albania and Hungary.

In a video purporting to show the gunman, which police have said they are treating as genuine, he is heard shouting “I am German…I was born here”.

The attacker had been obsessed with mass shootings, particularly school shootings, and a book on the subject was found in his belongings, and on his computer he had photos of Anders Breivik, the far-right terrorist who killed 77 in an attack in Norway five years to the day before the Munich shooting.

He had also visited Winnenden, the site of a school shooting in Germany, and taken photos.

However, investigators said there was no evidence that the shooter actively targeted his own classmates or the students who allegedly bullied him.

He is thought to have planned the attack for up to a year and, like Breivik, wrote a 'manifesto' outlining his “hate towards people”, but police have not made the content of this document public.

Aykan Inan, vice chairman of the Turkish religious community, emphasized that the memorial was for all nine victims.

“Religions stick together in Munich,” he said.

The families of two victims, a 15-year-old boy and a 45-year-old woman, also attended the memorial.

This Wednesday, the bodies of these two victims will be transferred to Turkey. Inan said that the costs would be covered by the community's funeral fund, however the city of Munich is expected to take on the cost of funerals and repatriation, following a joint request from all political groups represented on the City Council.

According to the request, money should not stand in the way of the desire of some families to have their relatives buried in their homeland.