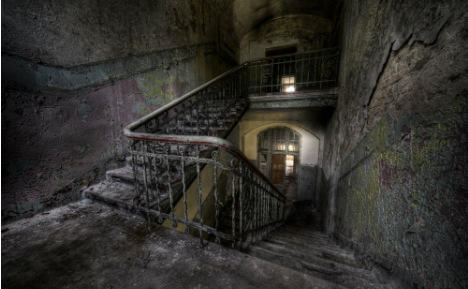 So why is the explorer, otherwise known as “Der Irische Berliner”, so fascinated by the capital? “Berlin is unique due to its history as a divided city,” Fahey told the Local. “There's been so much upheaval, so much change.”

“The fall of East Germany created a glut of abandoned buildings as factories and businesses were closed down or sold off to investors from the West. The end of the Cold War meant military camps were vacated,” he added.

Here are a few of the daredevil's favourite forgotten spots – and some of our own ideas, too.

Warning: Enter at your own risk, as trespassing is forbidden in some of these rotting ruins. Lying abandoned since 2001, this deserted theme park was known as Kulturpark Plänterwald before the fall of the Wall and then revamped under the name Spreepark after 1989. At one time, the park was flooded with around 1.5 million visitors per year.

Ciarán Fahey labels the Spreepark as his “first love”, as it was the first abandoned place he ever explored in Berlin. Recounting his visit in 2009, he said, “I discovered a wonder-world awaiting me – fallen dinosaurs, roller coasters, a ship with a dragon’s head, a wild west town, a ferris wheel, moustached cars with bowler hats, a psychedelic cat…”

Following two suspected arson attacks in 2014, the park is now merely a sinister shadow of its former success, with a giant plastic T-rex lying pitifully on its back, and swan-shaped gondolas sprawled on the ground. A cult favourite of budding explorers, Teufelsberg – literally translated as the “Devil’s Mountain” – is an enormous tower of debris which extends 120 metres above sea level.

Perched atop piles of rubble covering what was once a Nazi college, stands a former listening and intelligence station which the Allies used during the Cold War to spy on Soviet-controlled East Germany.

Today, it is one of the largest street art galleries in Berlin, home to the work of numerous world-famous artists. Hidden in the depths of a Brandenburg forest lies a lost city, purpose-built by the Soviets after the Second World War as a military base.

Vogelsang was home to military personnel and their families “with schools and shops for around 18,000 people”, according to Fahey.

The sprawling city harboured  tanks, missiles, and even nuclear weapons at one stage.

Recently, “there were some great murals and statues around the place”, Fahey added, “but now the local forestry board is knocking it all down so the forest can reclaim it.” Deathly silence reigns throughout the vast expanse of dilapidated rooms in this former military hospital, which operated during both World Wars, and was used by the Russians during the Cold War.

Not only was Adolf Hitler treated here during the First World War, but Erich Honecker – the leader of the GDR – was also a patient here in 1990, following his forced dismissal from leadership of the Socialist Unity Party.

More recently, parts of The Pianist and Valkyrie were filmed in this deserted hospital. Rusting bed frames, festering bathtubs and rubble litter the rooms and deathly-dark corridors.

The sheer size of this colossal former cement and chemical factory makes you feel like an ant when you wander round the imposing buildings, Fahey told the Local.

He also revealed that “there are still some evil-looking potions to be found lurking among the old buildings.”

This gigantic complex is now home to some fantastic street art. In addition, “it has been used for filming, notably for Homeland, though artists had the last laugh by writing anti-Homeland slogans in Arabic that were later aired in an episode of the show”, said Fahey.

Is someone watching you?

Extensive information about countless members of the GDR was meticulously gathered and carefully stored in this former location of the Ministry of State Security's Statistics Office during the Cold War.

Following the fall of the Wall in 1989, the building became home to the Federal Statistics Office and the Office for the Federal Commissioner of Stasi Archives.

Both institutions have since moved out and the building has been falling into disrepair since 2008. Although the architecture and colours are magnificent, the sanatorium harbours a dark history. Built in the 1920s, this enormous space became an armaments production centre in World War Two, before it became the landing spot during the Berlin Airlift, when goods were delivered to West Berliners after all routes in and out of the city were closed.

Thanks to its status as the biggest open space in Berlin, the former airport is also in high demand for events such as music festivals and concerts.

Locals knew it as “die verbotene Stadt” (the forbidden town) and were expressly banned from entering.

Complete with schools, nurseries, shops, an enormous swimming pool and an ornate theatre, Fahey estimates that the town was once home to 75,000 Soviet military personnel and their families.

Its other name was “Little Moscow”, as trains departed to Moscow daily from the town.

It has been left to rot since 1994 but “still oozes history”, in Fahey’s words. These decaying military barracks were used by the Nazis during World War Two and by the Soviets during the Cold War.

Today, the only things that move in these hauntingly silent rooms are the scraps of Russian newspapers which are peeling from the walls and fluttering gently in the breeze.

If it has not been vandalized or painted over, as sometimes happens, you'll also see a mosaic of an eagle grasping a swastika on the ceiling, a chilling reminder of the history that these ghostly barracks harbour.

So what does the future hold for Berlin’s abandoned haunts? Fahey claims that “Berlin is like a spoiled kid with too many toys.”

“It demands more and more buildings without giving thought to those it already has. The building will continue, and so will the waste,” he says.