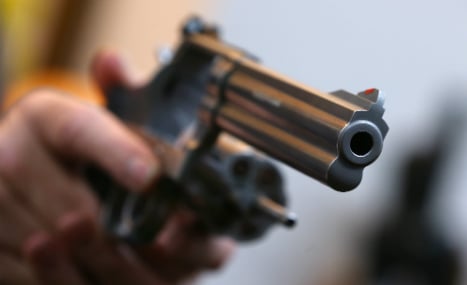 Sometimes there's a fine line between truth and fiction.

Just like the character in his novel, the defendant found himself struggling financially and decided to resort to drastic means to resolve the situation – namely, a bank robbery. However, just like in the novel, his plan didn't quite work out.

Perhaps he should have seen that coming.

The incident took place on January 26th this year in Lützschena-Stahmeln, a district of Leipzig in eastern Germany.

According to a police report at the time, the defendant entered a branch of the Sparkasse bank at the end of the day, wearing a mask and carrying an alarm gun. He reportedly pointed the gun at staff, demanding that they hand over money, and ordered customers to lie on the floor.

But when a bank employee handed over the cash, the defendant wasn't satisfied and demanded the contents of the safe as well – but the bank's security system prevented the safe being opened until after a time delay. After 25 minutes in the bank, the accused left with almost €40,000.

However, the writer only made it a few meters from the branch before police caught up with him.

A passerby had seen the would-be robber enter the bank with the gun, and had contacted emergency services. Meanwhile, the bank's security firm had been alerted and was able to observe the incident using surveillance technology, allowing police to arrive on the scene in good time. The author did not resist arrest.

Incredibly, the hapless criminal seemed to use exactly the same method as his protagonist, reports local paper the Leipziger Volkszeitung.

In the novel, the robber flees on a bike and hides a change of clothes behind an oak tree; when police searched the bank's surroundings, they found both a bicycle and a rucksack containing clothes (behind, you guessed it, an oak tree) and the suspect's DNA was found on both objects.

A presiding judge at Leipzig's regional court confirmed to The Local that the indictment had been read out in court, and although the 49-year-old suspect, who has lived in Leipzig for 20 years and has been in custody since the crime took place, had not yet entered a plea, his defence lawyer has announced his intention to plead guilty.

The trial is set to take place from August 10th-15th.