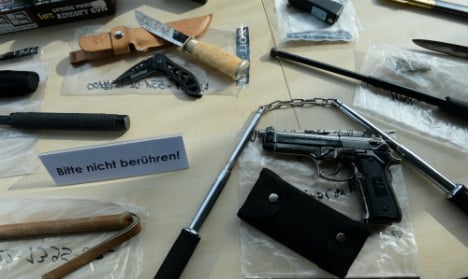 The 58-year-old man had come to the attention of police after making inflammatory comments against foreigners and Jews on twitter which amounted to incitement to racial hatred, according to a police statement.

When they searched his home, they discovered knives, daggers, samurai swords, loaded guns and pistols as well as air pistols and alarm pistols, stun guns, brass knuckles, truncheons, a crossbow, a bow and arrow, and two shoulder guns thought to be in working condition with munition.

Next to the front door was a homemade, loaded firearm. “Various computing and communication devices” were also found.

Police raided the residence in Obergiesing, close to Munich, at 6am on Tuesday morning. Germany has been stepping up its response to online hate speech in recent months, and last week saw the first nationwide day of raids against suspects, with homes of 60 people in all but two of the country's 16 states searched.

The man will now be charged with sedition, hate speech and several weapons offences, police said.