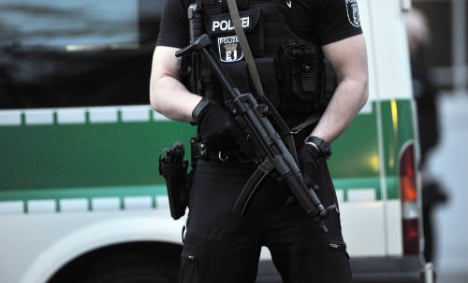 The demo, which at its height was attended by 750 people, wound through the Reeperbahn, Hamburg’s best known nightlife district, reports the Hamburger Morgenpost.

Police closed down the demo at around 9.30 pm due to a “lack of participants”. The protest passed largely peacefully, with the exception of a few small incidents.

The demo was triggered by a police raid on an address in St. Pauli on Monday evening, when they turned up with over 260 officers and arrested 35 men – all of whom were of African heritage.

The address on Bernhard-Nocht-Straße is reportedly a well-known housing project in Hamburg's left-wing scene.

The police report states that during the search officers seized 91 grams of marijuana, nine bags of cocaine and 12 mobile telephones.

The protesters at Tuesday’s demonstration claimed that police had used unnecessary violence and that they had been racist in the manner in which they conducted the searches.

Die Linke (the Left Party) also criticized the raid, claiming officers had arrived with submachine guns and with their faces masked, all because of a search warrant based on evidence of possession of a “small quantity of marijuana.”

“The ‘clear signal’ that the police wanted to send to the dealer scene turned out to be an operation comparable to that in a civil war,” said Christiane Schneider, spokesperson for Die Linke said in a statement.

“Calling in special forces carrying submachine guns and with masks over their faces is in no way proportionate to the reason for the raid.

“This completely disproportionate act of aggression was clearly intended to intimidate the affected Africans and all those in the neighbourhood who support them.”

Die Linke further accuse state authorities of playing politics – claiming the raids were conducted with an eye on the upcoming G20 summit in the port city.

A police spokesperson told The Local that the raid had been carried out after “a huge number of complaints from residents” about drug dealing in the area. Complaints centred on the fact drugs were being dealt in front of children and that it was even disturbing traffic.

The spokesperson refuted the accusation of racism saying “skin colour is completely unimportant to us – we detain people when there is a suspicion that they have committed a crime.

It is also “standard” for officers to be armed with submachine guns when officers do not know what is awaiting them behind a door, the spokesperson said.

The accusation bears a striking similarity to current criticism of police in Berlin regarding their treatment of the far-left scene.

Some of the worst violence in years has escalated on the streets of the capital in recent weeks after two now infamous police raids on an address in the east of the city.

In both instances, law enforcement entered a partly-occupied house in huge numbers. The second raid was later judged by a Berlin court to have been illegal.

Berlin's Interior Minister Frank Henkel has also been accused of using raids on the left-wing scene for his own political agenda. At state elections set to take place in the capital in September, Henkel is the conservative CDU candidate to become city mayor.