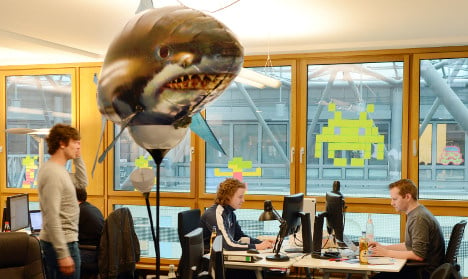 Unless “mystery shopper” and “cat sitter” really count as grownup jobs, it is fair to admit that I never had a job before moving to Germany.

I had a family, though, and that family was led by two proud members of your average Italian working class. They took pride in enduring through their working hours for me and my sister, embraced the suffering of it and its discouraging lack of prospects.

As I witnessed my parents' lives, I grew up preparing psychologically for the depressing start of my career, kind of like a criminal prepares for jail time.

After five years in Berlin and more than one tech company on my resume, I can say that working here has been mildly weird, consistently fun and nothing like I was expecting. These are six things that struck me most about German tech startups.

One thing I've learned from the Berlin startup scene is that descriptive names are so very passé.

If you're hired as an accountant at a tech company, for example, the chances you'll end up working in the “finance team” are extremely slim. Your team will instead be referred to with the name of an animal, a famous scientist or a made-up Native American tribe.

You will attend serious meetings meant to address the concerning performance of the Angora Rabbits, to contemplate the possibility of new hires among the Raccoons, or to find a new leader for the Alpacas.

My scientific guess is that by the year 2025, all the animal names will be taken and startups will have to start exploring uncharted territories, naming their teams after things like sexually transmitted diseases, stripper nicknames, Pokemons or toppings you can find on frozen yogurt.

Back in Italy I was taught that working equals suffering, and that the more you suffer, the more dignified your work is.

Imagine my surprise when I discovered that in Berlin startups you're allowed – even encouraged! – to have fun with your co-workers.

After some months of skepticism, I made peace with the fact that ping pong tables at the office are not a trap to catch the laziest employees, and that providing your staff with nerf guns isn't a cruel attempt to start a real-life version of the Hunger Games.

After five years I am fine – really fine – with companies offering me yoga classes and annual retreats to some German forest just to take my mind off things.

Of course if my parents had ever been taken into the woods by their employers, they would have assumed it was a trick to steal their organs and easily get rid of the bodies.

3. Dress Code or The Metamorphosis

This guy has already had his own 'Metamorphosis' at work. Photo: Pexels.com

The dress code of your regular Berlin startup ranges from non-restrictive to non-existent. Reason being that most companies aim at creating an open and welcoming environment, but also the fact that the CEO is usually a computer nerd who's been wearing the same three oversized hoodies since 1997, along with sneakers and a fancy black trench, but only 'cause he saw it in The Matrix.

In this anarchy of styles, every time there's a new hire you can observe their metamorphosis from beautiful butterflies to unattractive caterpillars. On the first day of work, they'll show up in what's basically a prom dress: perfectly ironed long-sleeve shirts, funeral pants and a sober blazer to tie everything up.

One week later, they will not make the effort to match their socks, they'll come to work directly from the club, and you'll have seen and memorized each and every one of their tattoos.

Let me tell you a secret: Germans love themselves some hierarchy.

Entering a German company means entering a tangle of roles, responsibilities and authority so complex that keeping track of Game of Thrones characters in comparison is a piece of cake.

Even the most ridiculous task – e.g. publishing a post on the company's Facebook page – can and will be treated as if you're actually dismantling a nuclear bomb and you need instructions on which wire to cut.

Before hitting the “publish” button, you'll need to check the organigram of the company – a 17-page PDF file – and make sure that you're not crossing anybody.

If you're not sure about it, ask your supervisor. She'll make sure to ask her supervisor, who'll ask his supervisor, who'll ask the CEO, who'll bring the matter to Angela Merkel at the next G7 and she'll secretly discuss it with aliens. Thirty-nine years later, if you've lived that long, you'll receive the final go and will be able to publish that GIF of Beyoncé falling from the stage.

Since there are so many layers of authority, German startups need to give their employees  effective instruments to express their concerns.

While my parents' generation only had alcoholism and starting bar fights as an outlet for work-related frustration, the German startup experience feels at times like a big therapy session. Aside from the numerous feedback talks you'll have with your supervisor during the year, in most companies you're given the chance to complain anonymously through bitter notes that are read aloud once a week: you can bitch with your HR person about the fact that they won't give you a raise, or rant on the company chat room over the theft of your favourite mug.

Even if deep down you're completely satisfied, you feel pressured to have strong opinions about stuff, and that's how you end up starting a petition to make the company reception area more similar to the control room of Power Rangers. Or so I've heard.

The Berlin tech scene is a beautiful coming together of nationalities and cultures. Walking through the corridors of a common startup means stepping on a carousel of strange languages harmoniously chasing each other, entering your ears, striking your curiosity.

Try not to get too curious, though. As much as learning how to curse in every language can always come in handy, the horrifying discovery that your name means “obese” in Danish can and will haunt you until the day you die.

Federico Prandi is an Italian expat living in Berlin since 2011. He’s into social media, online marketing and destroying his own reputation through a blog. Check him out on Twitter or read his blog, amorequietplace.com.