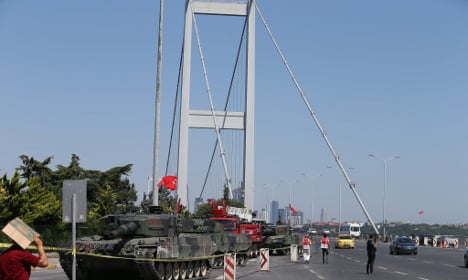 Turkish police guard near by military tanks on the Bosphorus bridge, after a failed coup attempt. Photo: DPA

“The democratic order must be respected,” Steffen Seibert tweeted.

“Support to the elected (Turkish) government,” he added. “Everything must be done to protect human lives.”

Merkel “is in contact” with Foreign Minister Frank-Walter Steinmeier and vice chancellor and Vice Chancellor Sigmar Gabriel, he said.

Meanwhile, the German foreign ministry urged its citizens in Turkey to exercise “the greatest caution” and avoid crowds and public places.

The attempted coup by a faction of the armed forces was quashed, Turkey's acting military chief of staff says.

Umit Dundar said 104 coup plotters had been killed and 1,563 arrested in a night of gunfire and explosions in Ankara, Istanbul and elsewhere.

A further 90 people died and 1,154 people were injured as thousands of Turks heeded President Erdogan's call to rise up against the coup-plotters.

It is not known who was behind the action.