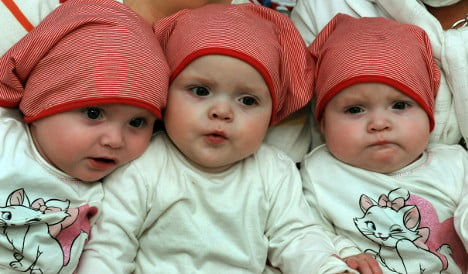 The report by the Cologne Institute for Economic Research this week showed that 35 percent of babies born in Germany in 2014 came into the world with unmarried parents.

And the study also revealed that there was great contrast between former East and West Germany, according to broadcaster Deutschlandfunk.

The more religious and wealthy West saw 29 percent of new little bundles of joy born to unwed parents, compared to nearly 60 percent in the former states of socialist East Germany, where church members were often regarded with suspicion by communists during the Cold War.

In the country’s capital, located in the East, more than half of baby Berliners were born out of wedlock, while some areas of surrounding Brandenburg were closer to 70 percent.

In the southern German states of Baden-Württemberg and Bavaria, which are predominantly Catholic, babies were comparatively more often born to married parents.

Another report on Friday showed that Germans are getting hitched later in life, but those marriages are also lasting longer, according to new figures released by the German statistics agency (Destatis).

There was also a drop in divorces between 2014 and 2015 of 1.7 percent. Most of the divorces in 2015 involved families with children, the report said.

And roughly 40 percent of marriages in 1990 have since ended in divorce.

NAMES
Adolf, Alexa, Greta: These are the names Germans don’t want to give their kids
Url copied to clipboard!