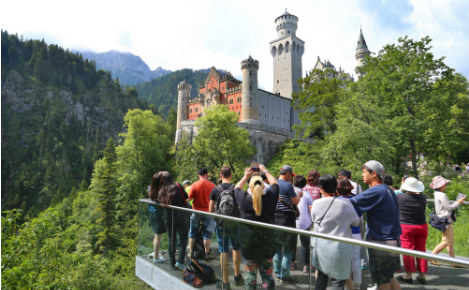 Surrounded by deep valleys, sprawling forests, craggy rocks, sparkling lakes and picturesque villages, Neuschwanstein is like something out of Grimms' fairy tales.

In high season, between 6,000 and 7,000 visitors pour into the Bavarian castle every day, whether to explore its history, check out the magnificent spot which inspired Walt Disney, or marvel at its idyllic panoramic views.

“We have more visitors than ever before”, says Ines Holzmüller, from the Administrative Department of Bavarian Castles.

The Chinese are the biggest group of visitors to the famous landmark. “I think most Chinese people know of it. For us, it’s the symbol of Europe”, says Jiangchuan He, who comes from the area surrounding Shanghai.

By far the most captivated by the castle are the Americans. Some exclaim “Oooh!” when they hear the tragic story of King Ludwig II – who drowned at a relatively young age in a Bavarian lake – and others whisper in awe, “It’s fit for a princess”, and “Who wouldn’t want to live here?” as they enter the King’s bedroom.

Bobbie Zemaneck from New Mexico gushes that the castle is “so wonderful, just as we’d pictured it”.

The majority of Americans who visit Neuschwanstein do so because of its connection with Disney. However, some appear to be confused about whether the 19th Century Bavarian castle inspired Disney or vice versa.

Castle curator Katharina Schmidt says, “They come here and say, 'Oh, they’ve copied it from Disney.' And then we say, 'No, quite the opposite. Walt Disney was here and took inspiration from Neuschwanstein.'”

Other Americans have different motives for exploring the castle. 17-year-old Devon Swafford, here on his second visit, enthusiastically claims to be a “big fan of Ludwig” and argues that the psychiatrists who declared him insane couldn’t possibly have talked to him properly beforehand.

Like the Eiffel Tower for the French, the London Eye for the Brits and the Empire State Building for the Americans, the famous castle is an iconic symbol of Germany.

Yet the Germans don’t seem to be as enthralled by the stunning landmark as tourists from other countries. They represent the smallest group of tourists who visit Neuschwanstein. Indra Grönke from Bremen says that Germans merely make the trip in order to “tick a box” to say they’ve seen it.

Audio guides are available in more than 18 languages for the visitors who come from all over the world to visit the remote spot, which is around 120 kilometres southwest of Munich.

The tour itself only takes about half an hour, as there are very few rooms which were actually finished. King Ludwig II was declared to be insane by the Bavarian Government before he was able to finish his masterpiece, which French tour guide Gilles Chavet describes as a “crazy fantasy”.

However, the rooms themselves, although few in number, are a sight to behold. Each one boasts a different artistic style, ranging from the Gothic to the Romantic to the Renaissance.

Despite the King’s wish for the castle to be preserved as a “sanctuary”, the first tourists began swarming into Neuschwanstein under two months after his death.

Neuschwanstein is open from 9am until 6pm until the 15th of October. Entry costs 12 Euros for adults, 11 Euros for concessions, and children under 18 go free.