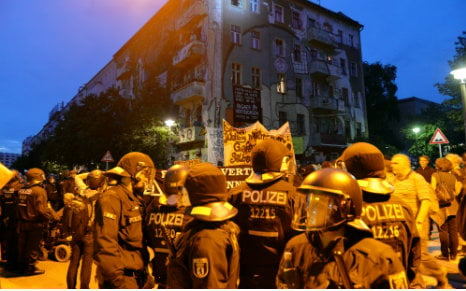 During evictions at the legendary Rigaer Straße 94 in late June, police moved in to clear squatters out of the bottom floors on the building, emptying out a pub and a workshop.

The operations led to a backlash across the city, with the capital's robust far-left scene responding by attacking banks and state buildings and setting cars alight.

As tensions refused to subside, 123 policemen were reported injured over the weekend when a demonstration in solidarity with occupants of Rigaer Strasse 94 turned violent.

It was the worst violence the capital had witnessed in years after a long period of relative calm between Berlin’s left-wing scene and authorities,

Now a Berlin state court has ruled that the police evictions were illegal, placing pressure on Berlin’s interior minister Frank Henkel, who signed off on the operation, Bild reports.

During the hearing, the court discovered that the building's owners did not have legal authorization to evict the squatters, nor did they bring judicial officers to the eviction.

Judge Nicola Herbst ordered the owners to give the premises back to the squatters until usage rights were fully resolved.

She appealed to the squatters “to find some way to negotiate with the owner so that the situation doesn’t spiral further out of control.”

The court was filled with people from the squatter and far-left scenes who applauded the ruling.

“We’ve won. I hope the Berlin police understand that now,” said the lawyer for the squatters, Lukas Theune.

'A disgrace for Berlin’s politics'

The Berliner Zeitung describes the police action as a “huge disgrace” for the capital’s politics.

“If there were ever a reason for an interior minister to resign, this is it.,” wrote editor-in-chief Brigitte Fehrle.

“How will he explain to the police chiefs that after a decades-long strategy of de-escalation that had proved successful, his high-handed actions have let the situation spin out of control again?”

In January Henkel already came in for serious criticism when he ordered a huge police raid on the same property in Rigaer Strasse after three masked people attacked a traffic cop.

“For four years Henkel has done nothing, and now for once he has had to show off the power of the state,” said Green party politician Canan Bayram at the time, implying it was a political stunt with an eye on state elections later in the year.

“Using violence against police and neighbours and setting cars on fire is not acceptable,” he told the Berliner Zeitung. “It is right to act tough against that. You don’t negotiate with people who use violence.”