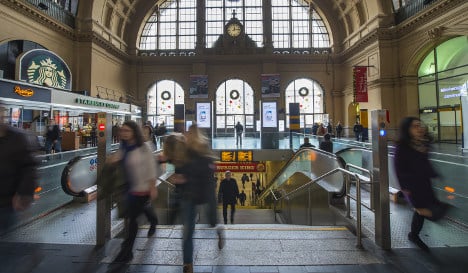 Witnesses told the Frankfurter Allgemeine Zeitung (FAZ) that the 62-year-old man had been hanging around a cafe at the busy train station for some time on Monday.

Then at about 1pm, he suddenly took off his shirt, and doused the upper half of his body in some kind of lighter fluid.

The next thing people saw was that he was in flames and was running around the area outside of the station.

Several passersby then ran to him and thrust him to the ground, using water to put out the fire, according to the newspaper.

Soon firefighters and medics were on the scene to take him to hospital.

Police reported that it appeared to be a suicide attempt and that the man was suffering from third degree burns. One of the people who initially tackled him also suffered from second and third degree burns and was also taken to hospital

An employee of the cafe told FAZ that the man was homeless and had stopped by nearly every day to loiter around the train station. But he had never before done anything to attract attention.

“I had the impression that he didn’t really know what he was doing. As the passersby saw the flames, some screamed. The flames were really high,” the cafe worker said.

Frankfurter Rundschau reported that “hundreds” of people witnessed the event which happened during lunch hour.

Police said they are still investigating the case.