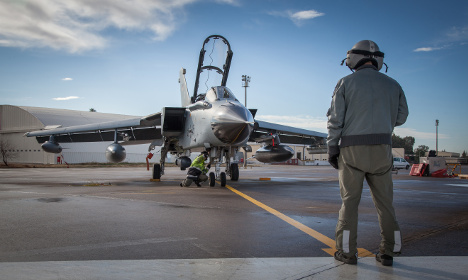 The Incirlik base. Photo: DPA

A German delegation this month was to travel to the Incirlik base in southern Turkey, used to launch coalition raids against Isis jihadists in Syria, but Turkey has blocked the trip.

Germany in December agreed to send Tornado surveillance jets and tanker aircraft to Incirlik to aid the multinational coalition fighting Isis and currently has about 240 soldiers stationed there.

Media reports said the ban was in retaliation for Germany's Bundestag lower house passing a resolution last month calling the mass killing of Armenians by Ottoman forces during World War I a “genocide”. But Turkish officials did not confirm this publicly.

“To us, it's a military issue,” Turkish Deputy Prime Minister Numan Kurtulmus said Monday, referring to any visit to Incirlik. “On the German side, the issue of Incirlik or sending soldiers is under the authority of the German parliament.”

He said because of differences in the two nations' laws, “the visit of the German delegation is not yet certain. Talks are continuing.”

Chancellor Angela Merkel held fruitless negotiations with Turkish President Recep Tayyip Erdogan on the planned visit at a NATO summit in Warsaw at the weekend but her spokesman said Berlin would keep up the pressure.

“The goal is crystal clear: it must be possible for our deputies to visit our soldiers,” the spokesman, Steffen Seibert, told reporters in Berlin.

“Of course it is necessary for our Bundestag deputies to be able to see our military in Turkey at Incirlik – it is a military under the control of the parliament.”

Merkel told ARD public television late on Sunday that she would press on in talks with Ankara.

“It is not the first time in politics that the first conversation did not suffice,” she said.

No 'alliance of values'

Turkey's Hurriyet newspaper reported that during their meeting, Erdogan expressed discomfort to Merkel about the German parliament's Armenia resolution and said he expected Berlin to distance itself from it. After the Bundestag vote, Erdogan had charged that the 11 German MPs with Turkish roots who backed the resolution supported “terrorism” by the banned Kurdish Workers' Party (PKK), and demanded that they undergo “blood tests” to see “what kind of Turks they are”.

Deputies from Merkel's ruling left-right coalition said that Berlin should consider pulling out of Incirlik if Ankara did not back down in the dispute.

“Soldiers and bases of a parliamentary army must be able to be visited by lawmakers at any time and everywhere,” Andreas Scheuer, a leading member of the co-ruling Christian Social Union, told the daily Tagesspiegel. Erdogan “is risking as a result the withdrawal of the German military”.

Social Democrat Niels Annen issued a similar warning. “We want to surmount these tensions but it must be clear: a permanent refusal by Turkey can lead to the end of the German participation in the NATO mission.”

National daily Sueddeutsche Zeitung said the affair pointed to a deeper rift, just as Germany is relying on Turkey to implement a complex deal to stem the flow to the European Union of Middle Eastern asylum seekers.

“With this ban, President Erdogan is once again showing his true colours,” it said.

“Turkey and Germany are both members of NATO but it has been a long time since there has been an alliance of values between Merkel and Erdogan.”