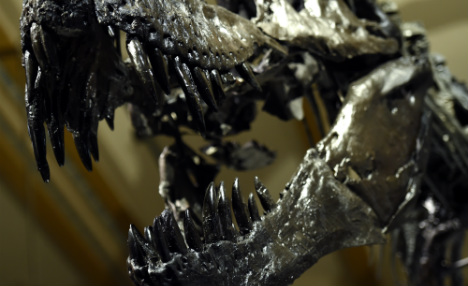 The reason paleontologists used to believe that the likes of the T-Rex were unlikely to have been prowling the terrain between Berlin and Hamburg is that the topography of northern Germany 150 million years ago wasn’t suited to it.

Around 150 million years ago, northern Germany was covered by a warm sea in which coral and snails – the fossils of which are often found nowadays in chalk stone – were more likely to be found than dinosaurs.

Despite intensive searches paleontologists haven’t managed to uncover a single skeleton of a carnivorous dinosaur.

But a new study by the state museum in Hanover, using cutting edge technology, has made startling new finds about the carnivores and their hunting grounds in modern day Germany. An image of a tyrannosaur. Source: State Museum Hanover

The team lead by Dr. Oliver Wings and Dr Oliver Gerke painstakingly examined tiny particles from dinosaur teeth to try and learn more about the creatures they belonged to.

Their results are clear: during the Jurassic period there was a huge number of carnivorous species in northern Germany

“We were surprised by the diversity of the kinds of carnivores we found,” said Gerke, who has been working on the project for three years.

The researchers believe it is highly likely that tyrannosaurs were one of the many species which roamed the German plains on the hunt for flesh.

Digital models of the best preserved teeth have now been uploaded onto the website of the Steinmann Institute at the University of Bonn.

“We want to make our research as transparent as possible for anyone who in interested in accessing it,” said Wings.