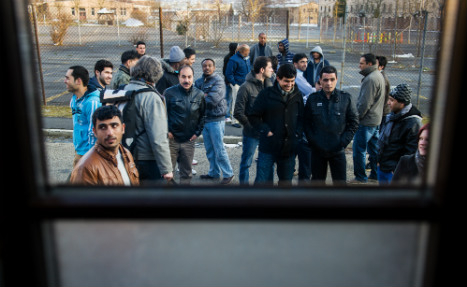 The legislation sets out how to spur integration in a country traditionally slow to embrace newcomers, while laying down their rights and responsibilities in their adopted country.

Europe's largest economy last year took in more than one million asylum seekers, prompting much soul-searching as well as criticism of the government of Chancellor Angela Merkel, who insists the country can cope with the influx.

In an historic first for Germany, parliament adopted the text which includes plans for new anti-terror legislation and now goes forward for final ratification Friday in the upper house.

The integration bill will provide subsidised courses to help newcomers settle down into new lives in Germany but will deny residence permits to those who fail to take up the offer of assistance.

“The acquisition of the language is also necessary for provisional right to remain,” the law notably states.

The legislation includes a section on the path to employment. Until now, asylum seekers could only obtain work if no German or EU workers could be found for the post, a restriction now being lifted for three years.

Conservative Merkel pointed out when the bill was first drawn up in April that Germany faced two migration challenges — to control the influx but also integrate, rather than simply register, newcomers.

From the 1960s, Germany invited Turks and other “guest workers” to fuel its economic miracle but failed to provide millions of immigrants and their descendants a place in their new society or a path to citizenship.

In recent years, Berlin has looked to immigration as a viable solution to the country's demographic time-bomb, with a shrinking native population expected to pose serious problems for Europe's top economy.

The ruling right-left coalition has also agreed to give more funding, personnel and powers to security forces to combat terrorism.

Even as the politicians moved to reset policy on the migrant issue, a Bielefeld University study found that the population in general are less positive on welcoming migrants long term into German society.

A majority – 55 percent – said they believed migrants should return home once the situation in their country of origin permits while 36 percent see large-scale immigration as “a threat” to Germany's future.

The federal and regional authorities have meanwhile reached agreement on parcelling out the costs of taking in the newcomers, official sources told AFP.

Powerful regional states have been urging Berlin to stump up an annual €8 billion to that effect which until now the finance ministry has refused to countenance.