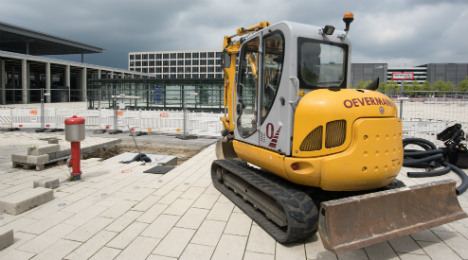 Photo: dpa
Airport boss Karsten Mühlenfeld is meeting with the supervisory board on Friday to discuss the future of the scandal-riddled airport.
In May, the airport authority confirmed that there would be no 2017 opening date.
Also up for discussion are which airports will handle passengers until BER finally opens its doors to the public.
Tegel Airport in the north of the city is slated to be closed as of mid 2018, while the existing Schönefeld Airport, which is adjacent to the new air hub, is to be renovated to accommodate government aviation traffic, such as the planes of official state visitors.

But insiders told the Berliner Zeitung there is no way the other airports can close on time.
“I am confident that the discussions about Tegel's future are not over. In fact, they have to start anew,” spokesperson for the German Business Aviation Association Hans-Henning Romberg told the daily paper.
Romberg hopes to see Tegel open to private, military, and state air traffic until the updates at Schönefeld can happen.
“The construction [at Schönefeld] should have started long ago,” an insider told the Berliner Zeitung.
BER officials have a plan for the renovation, but can't find a company to outfit the inside of the new terminal, which requires bullet-proof glass and translation facilities for its stately visitors.
“Not just anyone can do that,” said the insider.