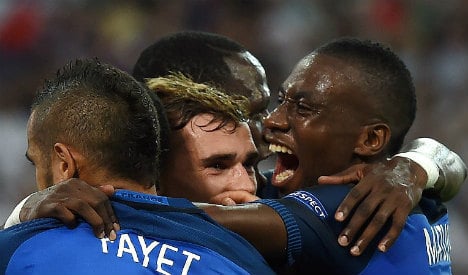 France will play Portugal in the final of Euro 2016 after beating Germany 2-0 in Marseille thanks to two goals from the tournament's top scorer Antoine Griezmann.

Griezmann netted at the end of the first half from the penalty spot after a controversial handball decision against Germany's Bastian Schweinsteiger.

Schweinsteiger conceded the penalty as replays showed his arm grazed the ball as he put his arms up while marking Patrice Evra from a corner.

Griezmann scored again in the second half after a mistake from German goalkeeper Manuel Neuer handed him an easy tap in.

It's the first time that France have beaten Germany in the finals of a competition since 1958.

“We suffered but we knocked them out,” said French coach Didier Deschamps after the game in which Germany dominated possession.

France's first win over Germany in their fifth meeting at major finals came out of a controversial penalty just before half-time.

Schweinsteiger conceded the penalty as replays showed his arm grazed the ball as he put his arms up while marking Patrice Evra from a corner.

Germany's stars crowded Rizzoli, furious with the decision. But it was a decisive blow from which the 2014 World Cup winners never recovered.

After suffering in the first half France were more in the game after the break as Germany kept the ball but threatened less. France looked dangerous on the break and got their reward in the 72nd minute after fantastic work from Paul Pogba forced goalkeeper Neuer into an error than handed Griezmann his second goal.

The win sparked wild scenes of celebration in the Velodrome stadium in Marseille and in fanzones, living rooms and bars around the country.

Deschamps said he felt “so much joy, and happiness for the players because they deserved” the win and the players had felt the support of the French nation.

“Before we came to the stadium we saw people going crazy — they are going to be even crazier on Sunday.

“I've always believed in my players. The ones I chose to form this group have repaid me handsomely, this is their story, their victory.”

Now Les Bleus are just one match away from winning the tournament. They face Portugal and Cristiano Ronaldo in Paris on Sunday evening.

A nation in desperate need of a lift can now expect rather than just hope.