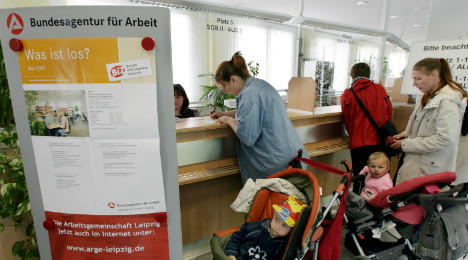 Women in line to file for Hartz IV benefits. Photo: dpa
Germany's 2.3 million children being raised in single-parent households are disproportionately at risk of poverty.
A study done by the Bertelsmann Foundation said that more than a third of single-parent families (37.6 percent) were dependent on Hartz IV social benefits. Only 7.6 percent of two-parent households are dependent on the payments.
Two-parent families also saw their risk of falling below the poverty line decrease to 11.7 percent, while 42 percent of single-parent families are at risk, a 6.6 percent increase between 2005 and 2014.
“When you are solely responsible for providing income, managing the home, as well as caring for and raising your children, it's very difficult to generate an income that properly provides for the family,” said study author Antje Funcke.
A family is considered below the poverty line when their household income falls below 60 percent of the national average income. In 2014, for a family with children under the age of seven, the threshold lay at €1,150 per month.
The study found that half of single parents receive no financial support from the other parent and a further 25 percent receive only intermittent alimony or child support payments. The Foundation argued that this lack of support is why single-parent families struggle to get out of poverty, even though 61 percent of single mothers are gainfully employed.
The study also found that more working mothers, single or partnered, work part-time instead of full-time.
Funcke noted that despite the rise in single parent households, politics had yet to keep up with the new reality of family life in Germany to fight poverty.
One in five families in Germany are single-parent households.