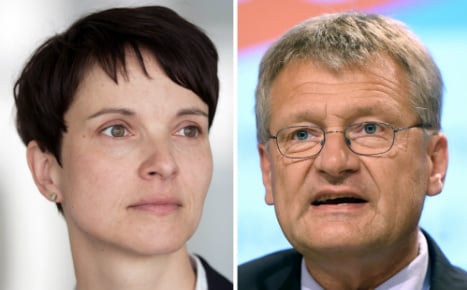 “The split in the party must stop now,” said AfD co-leader Frauke Petry on Tuesday evening from Stuttgart, capital of Baden-Württemberg.

“We owe that much to our voters. I would be especially happy to see Jörg Meuthen once again join the parliamentary group.”

But Meuthen, co-leader along with Petry, was enraged that she had even come to Stuttgart, where, until Tuesday, he was head of the AfD faction in the state parliament.

This wasn’t the first time that she had tried to “work her way into” his parliamentary group, he remarked.

Earlier in the day, Meuthen dramatically walked out of the AfD’s parliamentary group in the southwestern state along with 12 colleagues, describing the remainder of his faction as “the Alternative for anti-Semites,” the Süddeutsche Zeitung reports.

The 55-year-old was left fuming after his parliamentary group did not vote in the necessary numbers to boot fellow MP Wolfgang Gedeon out of their ranks.

The row started when comments made by Gedeon in a book published in 2012 resurfaced in the press after he won election to the state parliament in March.

Meuthen also saw it as “a clear case of anti-Semitism” and said that either Gedeon would have to go or he would leave the party.

On Tuesday the AfD group in the state parliament voted on whether to eject Gedeon from their ranks. Thirteen voted in favour of removing him, with ten against, meaning Meuthen did not muster the two thirds majority he needed.

Sticking to his word he immediately announced to the press that he was leaving the faction.

Petry, by far the more prominent of the two party leaders in the public eye, has been accused of attempting to kill off her co-leader during the row, as she consistently took the side of his opponents who argued that Gedeon should not be ejected until an internal investigation had been concluded.

Critics accuse her of wanting to harm Meuthen so that he cannot lead the party into national elections in 2017.

But the party hierarchy on the national level has thrown its backing behind the man from Baden-Württemberg, saying that it now considers the breakaway group the new AfD faction in the southern state’s parliament.

Speaking to broadcaster ZDF, deputy leader Alexander Gauland accused Petry on Wednesday of “not acting expediently” by travelling to Stuttgart to involve herself in the row.

He also alluded to “some people who are seeking to damage Jörg Meuthen” while adding that Meuthen had “acted effectively and in a way we all should have copied earlier.”

Die Welt has previously reported that many at the top of the party have reservations about Petry as party leader, despite her high profile.

But Petry was able to claim some success from her trip to Stuttgart. By the end of the day, she announced that that Gedeon would after all be leaving the party ranks.