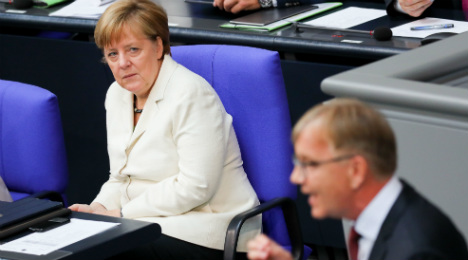 Merkel, usually a fixture in the crowd at key matches, will skip the Marseille showdown on Thursday due to “previous engagements”, the government spokeswoman told AFP.

On Thursday night, Merkel is to host a long-planned meeting with leaders of Germany's 16 states and her powerful finance minister, Wolfgang Schäuble, in Berlin to resolve a thorny budget dispute.

Die Welt newspaper reported that Merkel would nevertheless try to watch the match on television.

The German leader, in power since 2005, traditionally attends at least one match featuring the national side during European and world championships.

She attended two Germany matches during the 2014 World Cup in Brazil where they went on to win the title. Merkel famously posed for selfies with players when she visited the Mannschaft's locker room.

However Euro 2016 has coincided with the fallout from Britain's shock Brexit referendum and preparations for a key NATO summit in Warsaw this week and Merkel has yet to attend a single match.