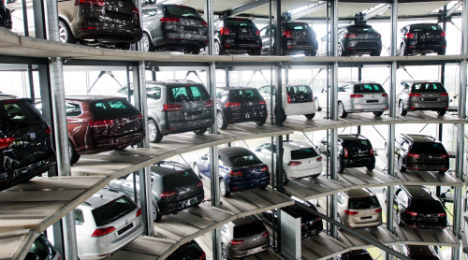 Photo: DPA
“I can confirm that on June 23rd, 2016, the Bundeskartellamt (federal competition watchdog) conducted a search related to the purchasing of steel in the auto and autopart industries,” Kay Weidner, a spokesperson for Germany's competition watchdog told The Local in a statement.
Six companies were raided during the search, which was conducted by 50 antitrust agents with the support of local police and state prosecutors, the Scwäbische Zeitung reports.
Weidner said no charges have been filed, adding that the searches do not mean that antitrust laws were violated.
Bosch, Daimler, and Volkswagen all confirmed they were among the six companies searched. All three also told the Schwäbische Zeitung they were cooperating with the authorities. Parts manufacturer ZF, which is based in Friedrichshafen, also confirmed it was part of the investigation.
“With regard to the current investigation, we cannot provide further details,” a Volkswagen spokesperson told the Süddeutsche Zeitung.
The Wolfsburg-based company is still dealing with its emissions cheating scandal after recently agreeing to pay a €13.3 billion settlement with U.S. Authorities.
EU antitrust laws state that companies are forbidden from any acts that would undercut market prices on any resource. Even simply discussing an act of collusion can result in heavy fines.