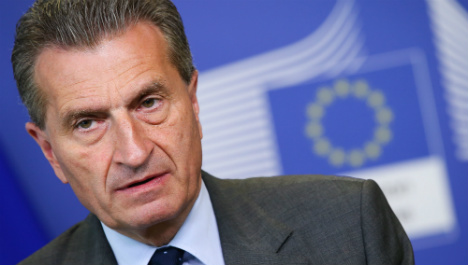 “Neither country met the budget commitments that they had both set themselves,” Öttinger told the mass-circulation daily Bild.

“I believe that if the EU Commission is to maintain its credibility regarding the budget rules, then we will have to impose sanctions on Spain and Portugal,” he continued.

“If we draw up common rules, those rules have to be adhered to. It would be difficult to explain to people if they're not.”

On Friday, another EU Commissioner, Valdis Dombrovskis, had suggested that Brussels could freeze the structural funding for the two countries.

In May, Madrid and Lisbon received a reprieve when Brussels delayed a decision to slap fines on the rule-breakers until July.

Inflicting penalties against an EU member state for public overspending would be an unprecedented step by the European Commission, the bloc's executive arm.

At the urging of Germany, the commission won powers to monitor national budgets during the eurozone debt crisis when overspending in members of the single currency such as Greece and Spain nearly destroyed the euro.

EU Commissioners are to meet on Tuesday to decide whether to impose penalties, which can be as much as 0.2 percent of gross domestic product (GDP).

Under EU rules, member states are not allowed to run up deficits in excess of 3.0 percent of GDP.