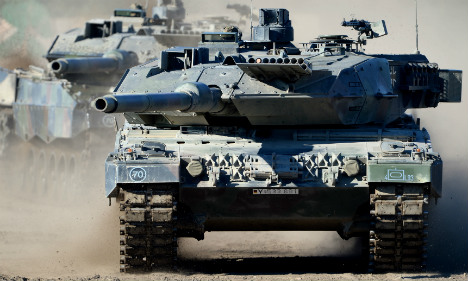 In the first half of 2016, the government approved the export of just over €4 billion worth of weapons to other countries – a rise of over half a billion euros on the same period in 2015, newspaper Die Welt reported on Tuesday.

The news comes after Welt am Sonntag reported on Sunday that 2015 was a record-breaking year for weapons exports, despite assurances from Economy Minister and Vice Chancellor Sigmar Gabriel that he wanted to cut down on arms exports.

Gabriel, leader of the Social Democratic Party (SPD), is set to publish official figures on weapons exports on Wednesday.

Numbers from the “Weapons Export Report 2015” show that the €7.86 billion in exports last year were almost double the total value of arms deals in 2014 and the highest level of sales so far this century, broadcaster ARD reports.

Of the €4 billion in exports that have so far been approved this year, €1.7 billion were sent to states in the Middle East and North Africa, including the delivery of a €1 billion frigate to Algeria.

On becoming economy minister in 2013, Gabriel pledged that he would reduce the value of German arms exports during his time in office.

The latest figures have forced him to defend his record, arguing that most of the weapons contracts which the government are currently approving were signed off by his predecessor.

The sale of the frigate to Algeria is one such instance, having been approved by the coalition of Chancellor Angela Merkel’s Christian Democratic Union (CDU) and the Free Democratic Party (FDP) before Gabriel took on the job.

In recent years, the percentage of weapons sales which have been delivered to non-allied states has also risen sharply to around 60 percent of the overall value of sales.

Before the CDU and FDP formed a coalition government in 2009, the value of sales to non-allied states lay at around 20-40 percent of the total.