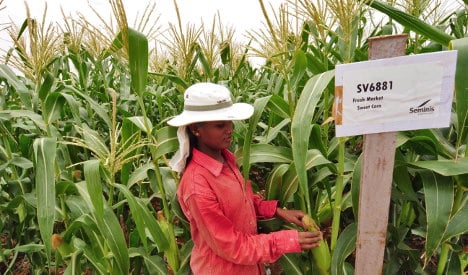 One month after the US seed and pesticide maker rejected a $62 billion takeover bid by Germany's Bayer AG as too low, Monsanto chief executive Hugh Grant said he had held talks with Bayer and with other unspecified companies.

“While there is no formal update on the Bayer proposal, I have been personally in discussions with Bayer's management over the last several weeks, along with others regarding alternative strategic options,” Grant said in a statement announcing the company's latest quarterly earnings.

“We continue to recognize the potential value these types of combinations can create as they accelerate innovation and increase choice for farmers across a broader set of crops, geographies and production practices, while improving the sustainability of agriculture around the world,” he said.

A takeover by Bayer would have been the biggest takeover by a German group of a foreign company and would create a new world leader in seeds, pesticides and genetically modified (GM) crops.

But German environmentalists worry about the impacts of the tie-up, with some telling AFP in the past that it would be “disastrous and diabolical.”

“The biggest fear is that Bayer is seeking to buy Monsanto to inundate the European market with GM crops,” said Anne Isakowitsch, a Berlin-based activist for the environmentalist campaign group, Sum of Us, who has launched a petition against the tie-up.

The Bayer-Monsanto dance comes in the wake of announced proposed megamergers involving US companies DuPont and Dow Chemical and Swiss company Syngenta and ChemChina as low crop prices depress demand for many agricultural products.

The deals have sparked worries among farmers who fear that consolidation will lead to higher prices for seeds. Some analysts have said a Bayer-Monsanto tie-up could face tough scrutiny from antitrust regulators.

“Our industry is running at a low point in the overall agriculture cycle and we've experienced an unforeseen level of challenges affecting our business in fiscal year 2016,” Grant said.

“Today, however, we anticipate positive resolution on the horizon for several of these challenges, coupled with early signs of recovery in agriculture.”